Comic Book / The Death of Superman 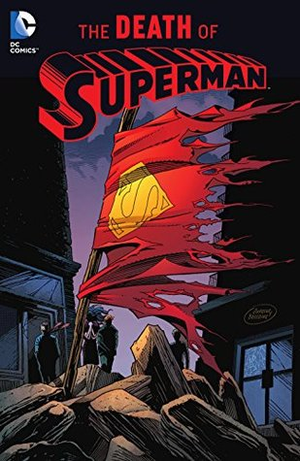 "For this is the day — that a Superman died."
Advertisement:

For some reason, killing off Superman is a popular idea. It may be because, being the Ultimate Hero, it is awesome to see him make the ultimate sacrifice. Maybe it's because he's normally invulnerable to nearly everything and so his death comes as a shock. Maybe it's a Christ allegory. Or maybe it's because some people can't stand the character and want to see him offed even if only for a short while. Whatever the case, this has been done several times in various media over the decades.

The first occasions were as "imaginary stories" (that is, set outside of the official continuity) published during the Silver Age of comics. Notably, the first "Death of Superman" story

(Superman #149) was written by Jerry Siegel in 1961. Originally an imaginary story, Absolute Crisis on Infinite Earths revealed that this story is in fact an alternate real universe: Earth-149.

Another notable one was Whatever Happened to the Man of Tomorrow?, which was about a theoretical end to the pre-Crisis Superman.

The final episode of Super Friends (aired in November 1985), was also titled "The Death of Superman", and opened with the funeral ceremony, featuring the coffin being sent into the sun. He gets better—he was only mostly dead. An earlier story from Challenge of the Superfriends also featured Superman (and the rest of the League) being killed.

However, the most famous instance was the Story Arc called The Death of Superman in the canon comics during the 1990s.

The Death of Superman arc happened by accident: originally, the then-current Superman writers were going to get Superman and Lois Lane married; however, Lois & Clark: The New Adventures of Superman was already green-lit at ABC, and the producers of the show wanted the wedding to happen first on the show. Forced to come up with a new storyline to replace "The Wedding" arc, Jerry Ordway, the then-current writer for The Adventures of Superman, jokingly said at the next meeting, "Let's just kill 'im!" Normally, the other writers would laugh it off, but this time, they would do the deed.

The whole arc, sometimes called The Death and Return of Superman for obvious reasons, is split into three parts:

In the first part, a monster named Doomsday comes out of nowhere and thrashes both Superman AND the Justice League International. When it attacks Metropolis, Superman must unleash all of his hidden power to stop it, killing Doomsday but also getting mortally wounded in the process. He dies in Lois Lane's arms, and his ragged cape ended up hung on a pole as a sort of tragic flag in what's possibly the most effective visual ever seen in comic book history.

Naturally, DC Comics was NOT planning on really killing off their flag-carrier permanently: it was a publicity stunt to boost sales, and the plan was to soon bring him back. However, the general media picked up the story and ran with it, and a lot of people believed it. This is because, at the time, not only had this thing not been done to death (this story may have been the Trope Codifier for Death Is Cheap, whose former Trope Namer is "Comic Book Death"), but the idea of killing of such an iconic figure in pop culture came as a shock to many, with Superman’s death even managing to make national news.

A rapid series of Follow the Leader events followed this: Superman hadn't even gotten back to life when Batman got his back broken in Knightfallnote Though DC constantly insisted that Knightfall was being planned long before TDoS; Wonder Woman got replaced by Anti-Hero Substitute Artemis in The Contestnote a story closely mirroring a Bronze Age story where she loses to a completely different red-headed Amazon; Oliver Queen was killed off and succeeded as Green Arrow by his son Connor Hawke; perhaps most infamously, Hal Jordan went insane and became a villain, adopting the new name Parallaxnote afterwards becoming the main villain of Zero Hour: Crisis in Time!, then sacrificing himself in Final Night, and was replaced by the Younger and Hipper Kyle Rayner. Meanwhile, over at Marvel, the Spider-Man moniker went back and forth between Peter Parker and his clone Ben Reilly during The Clone Saga.

After the obligatory period of mourning, DC then decided to milk the story a bit more, and extended it to last nearly a year with the rather inventive idea of having not one but FOUR people showing up and claiming to be a resurrected Superman. Each of these characters was allowed to star in one of Superman's then-current titles for a few months. These were:

It was eventually revealed that the real Superman was... None of them. Kal-El's corpse was turned into a Human Popsicle to be used as a Living Battery by The Last Son of Krypton (who turned out to actually be The Eradicator). The Cyborg Superman was actually Hank Henshaw, an Anti-Villain from a previous story, now a bona fide threat (with Mongul as his Dragon) whom the others had to team up to stop. Superman was soon Back from the Dead afterwards, and (infamously) came back with a mullet, which lasted four years. The Superman legacy carriers stuck around for other stories, with two of them (Superboy and Steel) even getting their own series. Steel would also appear in Superman: The Animated Series and Justice League Unlimited, and Superboy is a main character in Young Justice. The Reign also debuted Kismet, who was the living embodiment of the DC Universe, similar to Eternity from Marvel Comics.

The storyline had the most lasting impact, surprisingly, on the Green Lantern. Henshaw and Mongul worked to prepare Earth to be converted into a Warworld (basically like a Death Star). And to start it off he annihilated Hal Jordan's home town of Coast City, building Engine City in its ruinsnote planning to later do the same to Metropolis, while Jordan was in space. Jordan actually returned to Earth while the Supermen were fighting in Engine City, and understandably was not happy. This ultimately led to the Emerald Twilight storyline, where he massacred the Green Lantern Corps and the Guardians, becoming Parallax.

Later stories brought back Doomsday as well, who was revealed to have been created as an experiment on Krypton and buried on Earth long ago. Doomsday is now considered to be one of Superman's staple rogues due to killing him, and as such has appeared both in the DC canon and in many adaptations afterwards. However, he hasn't been quite as menacing since then, probably because he no longer has a story-backed reason to be, as well as the fact that since when he dies, he comes back evolved to be resistant to what killed him that time, it makes it tough for the writers to use him without major Villain Decay.

With the New 52, The Death and Return was taken out of the DC continuity, along with many other stories. Doomsday, however, still existed in the new universe, and makes a full New 52 debut in the Doomed storyline, which itself was loosely based on The Death of Superman. However, thanks to the events of Superman Reborn, the storyline is restored to continuity, though the biggest major change was the continued absence of Superboy.note Who was later revealed in Young Justice (2019) to have been trapped in another dimension during the entire Flashpoint reboot. He returned to find himself a stranger in a world that had changed without him.

In 2022, just in time for the 30th anniversary of this story arc, it was revealed that a Spiritual Successor was in the works — not only was Superman going to die (again) in this arc, but all of the Justice League would be dying with him, including Batman, Wonder Woman, Green Lantern (John Stewart), Aquaman, Martian Manhunter, Green Arrow, Black Canary, Hawkgirl, and Zatanna, along with every member of the Justice League Incarnate team — with Black Adam as the Sole Survivor. The Death of the Justice League is set 20 Minutes into the Future of the setting as of Infinite Frontier, with many of the allies of the fallen heroes being pushed into greater positions of power ahead of a massive conflict. The event also serves as a prelude to the next big crossover story arc, Dark Crisis On Infinite Earths. In contrast to The Death of Superman, the ongoing titles featuring the aforementioned characters actually continued around the same time, showing their exploits prior to their untimely demises. As well, a 30th anniversary one-shot, reuniting the original creators that helmed the iconic storyline, was announced on July 27, featuring four new stories - three focusing on the point of views of the Guardian, John Henry Irons and the Kents and one story featuring a young Jonathan Samuel Kent learning of the events of his dad’s death and facing a new threat called “Doombringer”.

A video game adapatation was made by Blizzard Entertainment and Sunsoft for the Super Nintendo Entertainment System in 1994, and for the Sega Genesis in 1995. An animated movie based on the storyline titled Superman: Doomsday came out in 2007 and started off the DC Universe Animated Original Movies line. However, Doomsday took many liberties with the original arc to condense it into one movie. The line later revisited the story with a relatively Truer to the Text adaptation, split into two parts, named The Death of Superman and Reign of the Supermen, in 2018 and 2019 respectively.

Alternative Title(s): The Death And Return Of Superman