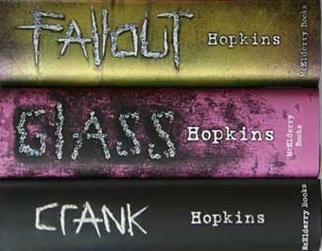 Crank, Glass, and Fallout are a trilogy of verse novels by Ellen Hopkins. The first two novels, Crank and Glass, center on teenager Kristina Snow, who develops an addiction to methamphetamine that quickly takes control of her life. The third novel, Fallout, focuses on Kristina's three oldest children, all of whom have grown up without their biological mother and struggle with their own issues as a result of their mother's addiction and abandonment of them.

The series is loosely based on the experiences of Hopkins' own daughter, Cristal, and her own struggle with methamphetamine addiction.

Not related to the film Crank.