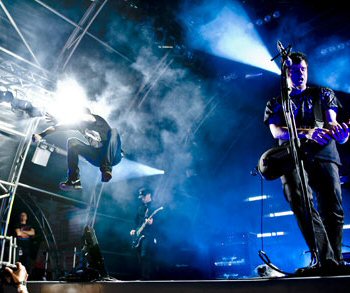 Like them or not, few deny Pendulum are cool.
Influences:
Ladies and gentlemen, we understand that you have come tonight to bear witness to the sound of drum & bass. We regret to announce that this is not the case, as instead, we come tonight to bring you the sonic recreation of the end of the world. Ladies and gentlemen, prepare to hold your color.

Okay, fuck it. I lied.
It's drum & bass. What you gonna do?
—The famous opening lyrics of "Blood Sugar"note Specifically the 2005 Essential Mix version
Advertisement:

Pendulum are an Australian-British Drum and Bass and electronic rock band founded in 2002 in Perth by Rob Swire, Gareth McGrillen, and Paul Harding.

At the time, Harding was a veteran DJ while Swire and McGrillen were members of the rock band known as Xygen. After hearing Konflict's "Messiah" at a rave, they were inspired to enter into the DnB genre. In 2003, the band relocated to the United Kingdom, where they put out their first official releases, culminating in their debut album, Hold Your Colour, which was a widespread critical success and saw some of the biggest sales the DnB genre has seen to this day. It's now said to have changed the face of the genre.

In Silico (2008) marked the beginning of their experimentation with their new formula, crossing DnB with conventional rock instrumentation to the tune of serious backlash from their fanbase. The further integration of styles on Immersion (2010) pacified most of this and offered greater crossover than ever before.

While Pendulum are very popular in Britain and Australia, their chart success in the US hasn't extended much beyond "Propane Nightmares

". Unlike most DnB acts, they're known to put on spectacular live shows, equally at home supporting Iron Maiden or playing DJ sets in underground clubs.

Swire announced the indefinite dissolution of Pendulum on his Twitter in June of 2012, claiming that it had become more work than fun. In the meantime, he and McGrillen began work on another dubstep and electro house project which you may know as Knife Party.

that Pendulum would "probably" release a new album in 2014, although he and McGrillen later admitted in a Reddit AMA that their disillusionment with the project still stood. Little talk of a new album surfaced in subsequent years, but the band reunited live at the 2016 Ultra Music Festival in a joint closing show with Knife Party. Over the following years, they would play a few more shows before Swire officially confirmed the return of Pendulum. Their first release back was a compilation of remixes of songs from their past discography, named The Reworks and released in 2018.

, their first new music in a decade. They released another single, "Come Alive", in April 2021.

Not to be confused with the 1970 CCR album of the same name.

Pendulum have examples of: