Spoilers for The Stolen Century and Story and Song and related spoilers from The Suffering Game should be spoiler-tagged. Everything else is fair game. Reader beware: you're about to enter... the Spoiler Zone!

"What if you didn’t have to worry and you could just cut out the bullshit and do good recklessly. That kind of defines our whole being. Reckless good doing is, like, kind of what we do."
—Magnus Burnsides

The PCs in general. 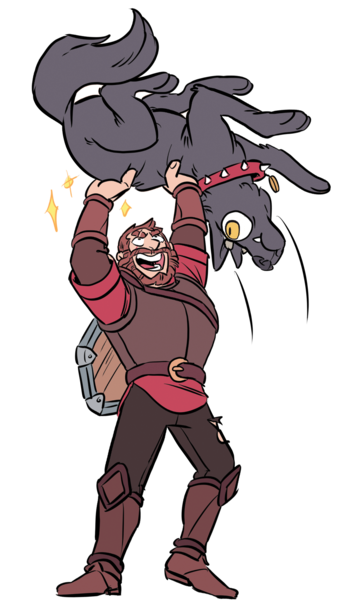 Magnus as he appears in the Graphic Novel
"Magnus rushes in!"

A brawny, impulsive "Ruffboi", Magnus is a folk hero from his hometown of Ravensroost, dedicated to protecting the weak and helping those in need, but is often hamstrung by his willingness to blindly rush in without thinking (like, in Merle's words, "a giant horse's ass"). He is played by Travis, the middlest brother. 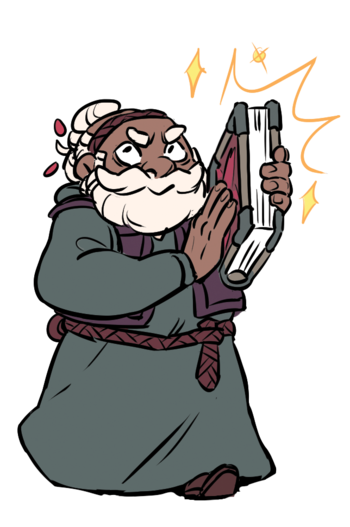 Merle as he appears in the Graphic Novel
"I cast Zone of Truth!”

A laid-back cleric of Pan, God of Nature. Merle is often absent-minded and overly blasé about serious situations, but is generally kindhearted and fatherly (provided you don't accidentally trigger his feelings of inadequacy). His signature spell is "Zone of Truth", which he is known to cast at completely inopportune moments, and is notorious among the rest of the party for not doing his job of healing them often enough. He is played by Clint, the brothers' father. 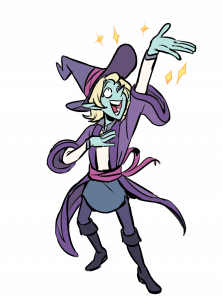 Taako as he appears in the Graphic Novel
"Abraca-fuck you!"

A vain, narcissistic wizard, Taako (y'know, from TV?) is a former travelling entertainer who ran a Cooking Show, but had to flee that life after it ended in disaster. Taako is often amoral and self-serving, but goes out of his way to help those he cares about, often by Taking a Third Option. He is played by Justin, the eldest brother.

The Bureau of Balance

The Bureau of Balance

The organization looking to find and destroy Grand Relics.

"We must hasten our efforts to gather the Relics. Because if a storm is brewing, we cannot hope to weather it if we are busy putting out the fires that threaten to consume our world." 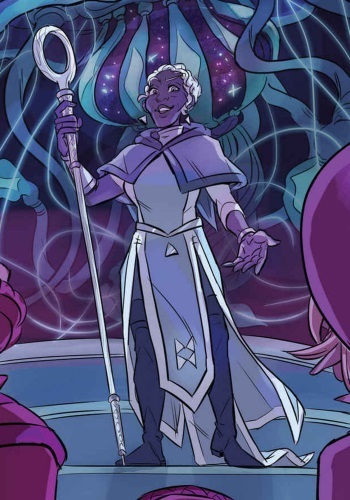 Lucretia as she appears in the Graphic Novel

The Director of the Bureau of Balance. 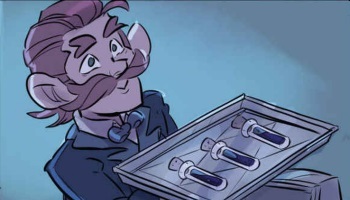 Davenport as he appears in the Graphic Novel
"Davenport!"

The Director's assistant. A gnome who can only say his own name. 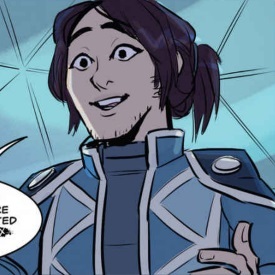 Avi as he appears in the Graphic Novel

A humble guard who works for the Bureau of Balance. He works reconnaissance and operates the bubble ships that the Bureau uses to transport agents. 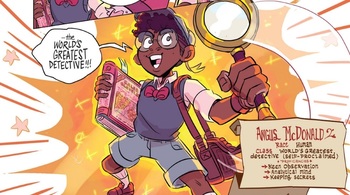 Angus as he appears in the Graphic Novel
"I'm the world's greatest detective!"

A young boy first met on the Rockport Limited, where he was investigating the case of the Rockport Slayer. He later joins the Bureau as a Seeker to feed the party live intel concerning their mission.

The team's original halfling stoner roommate with a passion for Pringles, he was later imprisoned by the bureau, seemingly because Griffin thought his name was stupid. Although Magnus's visit to him in jail implies there's a darker reason for him being locked up.

A gigantic blue jellyfish with a swirling galaxy of lights inside of its bell. The creature that wiped the memories of the Relic Wars from the populace.

A half-elf Bard who tends to the Voidfish. 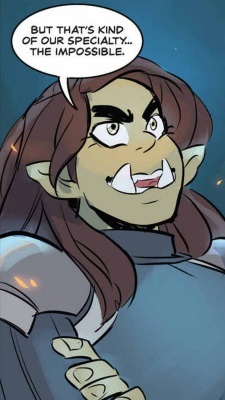 Killian as she appears in the Graphic Novel

Orcish Ranged Fighter, and one of the Bureau’s star Regulators.

"You guys ready to get busy livin' or get get busy dyin'?"

A Dragonborn Rogue who also works as a Regulator alongside Killian.

A dwarf who's one of the Bureau's star regulators on Killian's team who dies during the events of The Crystal Kingdom.

A robot assistant on Lucas Miller's laboratory who later joined as a regulator for the Bureau of Balance. Is actually the ghost of a halfling named Noelle Redcheek inhabiting a robot body.

The much abused gnomish Artificer of the Bureau who runs the Fantasy Gachapon machine. 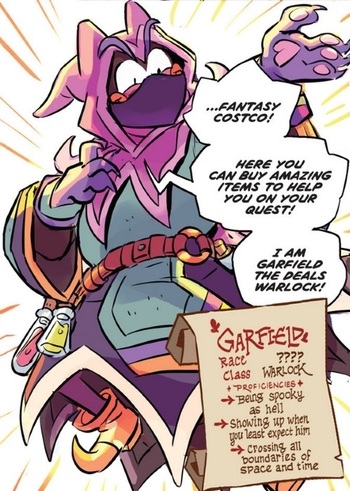 The resident semi-spectral Deals Warlock of the Fantasy Costco, there to sort out any price discrepancies or make exchanges for goods.

An orcish Bard and member of the Bureau of Balance administration. He teams up with the party for the (four person) team-building exercise in the MaxFunCon East Live episode.

The Bureau's resident scientific consultant. Technically not a member of the organization, though he has a great deal of input and influence on how things are run. 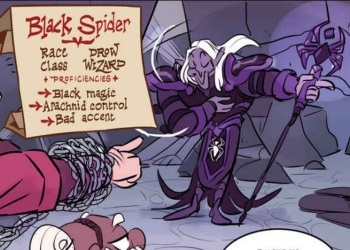 Magic Brian as he appears in the Graphic Novel
"We have guests, dear, how exciting!"

A Drow Wizard in search of the Phoenix Fire Gauntlet. 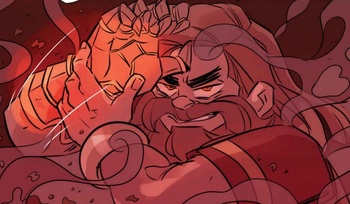 Gundren Rockseeker/Bogard Stoneseeker as he appears in the Graphic Novel 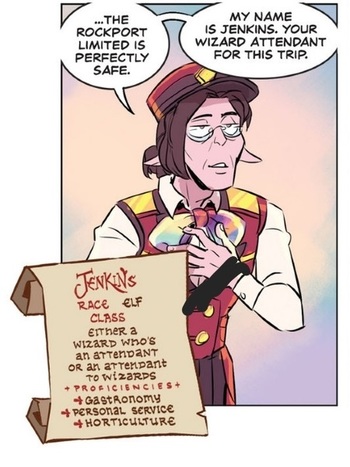 Jenkins as he appears in the Graphic Novel
"Smell ya later."

An elvish Wizard working as the butler aboard the Rockport Limited train. Is also the infamous "Rockport Slayer," a thief and murderer being tracked by Angus.

A half-elf Goldcliff Battlewagon racer who turned to a life of crime after finding the Gaia Sash.

"Living ones. Permit us entry into this world, so we may tear down the barrier between life and death. Join us in our cause."

Legion is not one person, but rather a conglomerate of spirits in the shape of a giant skeleton, who attempted to break out of the Astral Plane.

High elf brother and sister, who are the proprietors of Wonderland.

First appearing as a cluster of eyes in the sky, and a group of vaguely humanoid creatures that appeared to inhabit the Ethereal Plane, The Hunger is a hive mind of darkness incarnate, encompassing multiple planes of existence. They've been chasing our heroes for over a century, trying to retrieve The Light of Creation to further its own goals, and destroying nearly every plane in its path.

The Grand Relics are powerful artifacts created by the order of wizards called the Red Robes. Each artifact embodies one of seven of the D&D schools of magic.

A gauntlet that grants the user immense power over fire. It was hidden in Wave Echo Cave and is sought by Magic Brian and Gundren Rockseeker. Belongs to the school of Evocation. Created by Lup.

A small monocle with the power to turn any cast illusion real. Discovered by the Reclaimer Leman Kessler, who was murdered by the "Rockport Slayer" before he could return it to the moonbase, requiring the party to escort it on the Rockport Limited to Neverwinter. Belongs to the school of Illusion. Created by Davenport.

A sash granting god-like power over nature. Used by the woman known as the Raven to go on a crime spree. Belongs to the school of Conjuration. Created by Merle.

A stone capable of transmuting any material into anything else. First found and experimented on by Lucas Miller, it was accidentally activated and began transmuting his floating lab and anything it touched into pink tourmaline, forcing the party to retrieve and deactivate it before the lab made contact with the ground and consumed the planet. Belongs to the school of Transmutation. Created by Taako.

Described by Lucretia as "the most seductive" of the Grand Relics, the Temporal Chalice grants mastery over time, and was used to trap the town of Refuge in a time loop. Belongs to the school of Divination. Created by Magnus.

The final Grand Relic, and something of a Walking Spoiler. It's Lucretia's white oak staff, and the relic that she created. Belongs to the school of Abjuration.

It's the Adventure Zone!

The guy that announces the beginning of each episode. 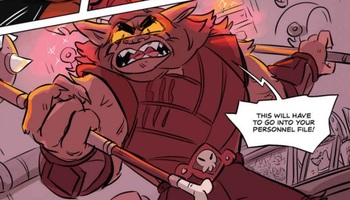 Klarg/G'Nash as he appears in the Graphic Novel

A bugbear living in Cragmaw Hideout, and the boss of the gang of gerblins living there.

Magnus’s pet goldfish. Has no abilities and serves no purpose whatsoever, but Magnus loves him a lot.

Captain of the Goldcliff Militia and undercover Seeker for the Bureau of Balance.

Halfling Monk and lieutenant of the Goldcliff Militia.

The nature god that Merle worships.

A mystical bounty hunter responsible for retrieving souls that have escaped the underworld. He works for the Raven Queen, a deity responsible for maintaining order and balance between the worlds of the living and the dead.

"Get the hell away from my son!"

Lucas Miller's late mother who died because she saw all of the universe at once.

The Protector of Refuge, an earth elemental of one consciousness split between two bodies: that of a Vermillion Flycatcher and a red clay golem.

"You're going to be amazing.''

The goddess of fate and the natural passage of time. She weaves the tapestry of time, recording everything that has happened, as it happens.

The Sheriff of Refuge, who is mysteriously absent for the greater part of it.

A Refuge miner wrongly imprisoned for destroying the Temple of Istus. Seems paranoid that everyone and everything is a gerblin.

The proprietor of Refuge's only Saloon, The Davy Lamp, and a huge fan of Taako.

The deceased wife of Magnus Burnsides, killed when the governor that Magnus helped depose returned to destroy the town of Ravensroost.

The former ruler of Ravensroost, and presumably several other towns in the area. Became extremely corrupt due to seeing his power in the region as endless. Deposed by Magnus, only to return while he was away and destroy a significant chunk of the town, sending all the survivors running.

Merle's estranged ex-wife and the mother to his son Mookie and his step-daughter Mavis.

Ruler of the city of Neverwinter, and the single most powerful person in the world.

A disembodied head that the boys meet during Wonderland. Since he's unable to do much in his current state, they take him along, taking his penalties in the process. Also a powerful sorcerer who accompanied Lucretia on her own journey through Wonderland. 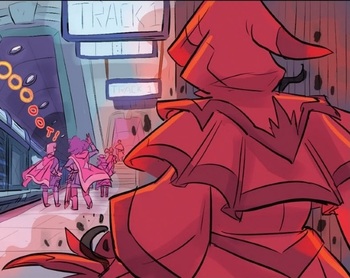 The Red Robe as they appear in the Graphic Novel
Click here to see The Red Robe's true identity Barry Bluejeans  [[quoteright:350: 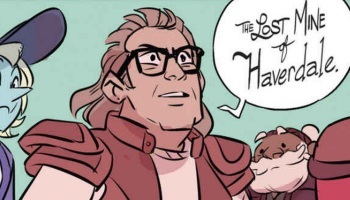 A member of the supposedly long gone order of Red Robes that caused the Relic War by creating the Grand Relics who has taken an interest in our heroes.

A Walking Spoiler mentioned by the Red Robe.

"The Man Wreathed in Flames"

A denizen of the Plane of Thought (i.e. our world) who works a Tex-Mex food truck.

The creator of the world of The Adventure Zone, as well as all the other planes the cast visited during The Stolen Century.

A buff wrestler who works alongside Jess "The Beheader", and appears in "The Boston Live Stunt Spectacular" and "Live Candlenights Spectacular". He wears wristbands and shorts, and is in no way related to a certain famous WWE persona.

As part of the "Great Switcheroo!" promotional event with other Podcasts in the Maximum Fun Network, the hosts of the Flophouse took over for one episode, playing a brand new set of characters in the same universe. Their first adventure happens concurrent with the events of the main story, approximately around the same time as the Moonlighting arc. The story proved to be popular enough that characters and events referenced there were made Canon and are sometimes referenced during the main story. When the main cast took a hiatus, they were invited back for another adventure, taking place after the Petals to the Metal arc.

Heir to the famous Silverview fortune. Played by Zhubin Parang.

and Comic Relief of the group. Brother of Carey Fangbattle (see above). Played by Elliott Kalan.