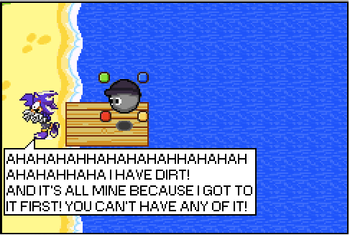 Uniju's on the right, and DarkHero Sonic's on the left, acting just like he normally does.
Advertisement:

is a Sprite Comic on Userpedia, made by Uniju, that began around Halloween 2008. It follows the adventures of Uniju and his friends as they go on multiple holiday-themed adventures, and occasionally non-holiday adventures. There are 3 main characters in the comic:

There are also a few other characters who commonly appear but aren't quite main characters.

The series is one of Userpedia's longest-running comics time-wise, while also being one of it's shortest runners in issues; in 8 years, 17 issues have been released.