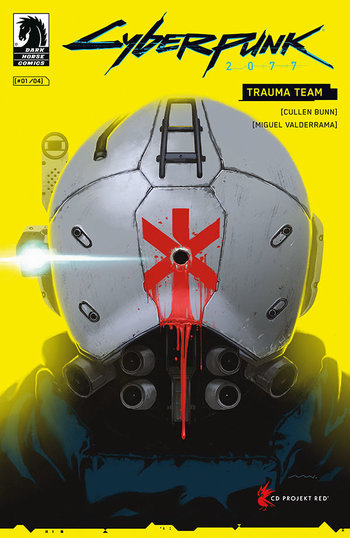 Cyberpunk 2077: Trauma Team
Nadia: Everyone's resentful of how little money they make. Doesn't change anything.
We get the call. We do the job.
Advertisement:

Cyberpunk 2077: Trauma Team is a graphic novel by Cullen Bunn and Miguel Valderrama. It takes place in the Cyberpunk 2077 universe, wherein Trauma Team International (#TTI!) is a corporation that responds to medical emergencies with Combat Medics and sharpshooters.

The graphic novel jumps back and forth between two characters, Nadia, the survivor of a Total Party Kill, and an unnamed Winter Royal Lady, as they discuss Nadia's battle readiness after she watched the rest of her team get butchered by a Katana-Weilding Maniac.

The next section of the book has Nadia and her new team responding to a call in a half-demolished construction site. One of their platinum members sends a distress call. Insert coin to spoil.