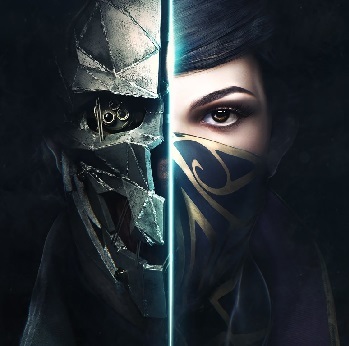 Take Back What's Yours
"It's happened again. Someone's pulled the rug out from under you; an empire at your feet, and you've lost it all. Be honest: did you really deserve any of it? More important: what would you do to get it back? Careful. There's always a price to pay. What you decide will ripple across the years; blood in the gutters and corruption on the wind. It'll be fun watching this unfold. What will you do with this power I've given you? How will you make your mark on this wretched world?"
— The Outsider
Advertisement:

Dishonored 2, released November 11th, 2016, is the first Numbered Sequel to 2012's adventure/Stealth-Based Game/Immersive Sim Dishonored, developed by Arkane Studios for the PlayStation 4, Xbox One and PC, and the third entry (following the Daud DLC) in the Dishonored Series.

15 years after the events of the first game (more specifically, a Low Chaos playthrough of the first game), Emily Kaldwin rules The Empire from Dunwall Tower, with her father Corvo Attano at her side as Lord Protector. Emily doubts that she is being as good an empress as her late mother Jessamine Kaldwin, while she and Corvo are being framed for the murders of Emily's critics, committed by a hooded assassin known only as the Crown Killer.

On the anniversary of Jessamine's death, Emily receives a visit from the Duke of Serkonos, Luca Abele, and Emily's supposed aunt, Delilah Kaldwin. Delilah declares herself the true empress and the duke's soldiers attack; Corvo defends Emily and stabs Delilah, but she shrugs it off and strips him of his magic. Emily and Corvo stand back-to-back, at which point you choose who you'll play for the entire game.

Whoever you choose must escape the chaos while the other is turned to stone, leaving Dunwall on a ship captained by a mysterious ally. You'll head to Serkonos' capital city and Corvo's childhood home, Karnaca, in order to eliminate the coup's conspirators, find out how to defeat Delilah, and try to solve some of Karnaca's own problems. Or maybe just exact revenge. Either way, the Outsider is looking forward to your journey, whether or not you accept his Mark.

Dishonored 2 expands on its predecessor in numerous meaningful ways. The biggest change, obviously, is that Corvo is now joined by Emily as a player character, who has her own suite of powers to play around with. The setting has moved mostly from Dunwall to Karnaca, a sunbathed Greco-Roman/Indian style city, and the level design has changed somewhat as a result, with the buildings being far more open and detailed than previously seen. Corvo and Emily are much more agile than Corvo was in the previous game, able to now vault over objects and pull people over cover. The game allows for more non-lethal options in gameplay as well, featuring changes like the ability to non-lethally drop attack someone and being able to choke opponents out mid-fight. In addition, there are more gadgets and gear to play around with this time as well, and the Chaos System makes a return.

Spoilers of the previous game will be unmarked. Examples for the standalone sequel, Dishonored: Death of the Outsider, go on that page.