The Dishonored series (Dishonored, Dishonored 2, Dishonored: Death of the Outsider) are very story-heavy games, and with that comes a large cast of characters, each interesting in both personality and visual design.

Per the wiki's spoiler policies all trope names will be visible and there will be plenty of unmarked spoilers. Read at your own risk.

Main Recurring Characters are given in bold:

The mangled captain of the good ship Dreadful Wale, Meagan is a friend of one of Corvo's old allies. Arriving in Dunwall too late to warn the Empress of the impending coup, she ferries Emily or Corvo to Karnaca to find a way to get the throne back. Staunchly reliable, she still has some secrets of her own.

Emily Kaldwin's lover. An ambiguously gendered noble who left the Dunwall before the coup. They are first mentioned in the novel The Corroded Man. 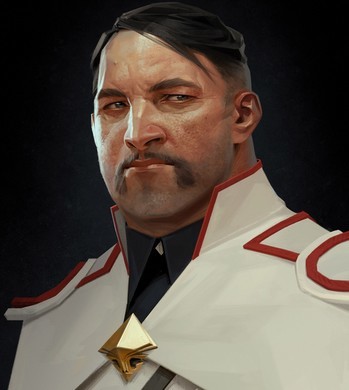 The acting Duke of Serkonos during the events of Dishonored 2 and the son of the previous Duke, Theodanis. In contrast to his father, he oppresses the people of Serkonos, provoking acts of rebellion against his authority. 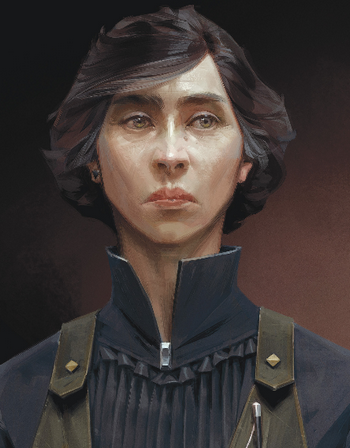 This one has a good heart, but there's something else there too. Watching from the inside.

A doctor working at the Addermire Institute. She is famous for her work with the city's working class, trying to alleviate the woes of miners and Bloodfly victims, but has been confined in the Institute for some time by the Duke. 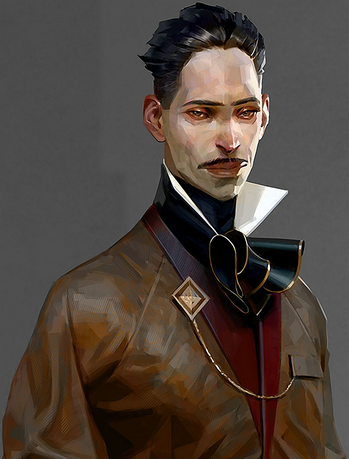 It is important to him. He wants others to notice the complexity of his work. The genius of his innovations. These are his thoughts...

The Grand Inventor to the Duke of Serkonos and founder of Jindosh Technologies. He is responsible for the creation of the Clockwork Soldiers and is a former student of the natural philosopher Anton Sokolov. He is featured in the E3 2015 Announcement Trailer for Dishonored 2. 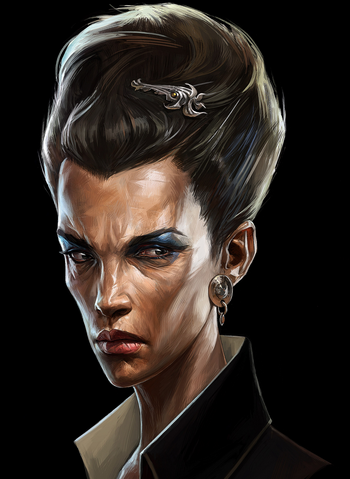 Loyal to Delilah, after death and across all these years.

Curator of the Royal Conservatory of Karnaca and the first Brigmore Witch to be created by Delilah, serving as her lieutenant. She is an important member of the coven and seemingly the only person Delilah is ever seen showing genuine human affection towards.

He's thinking about his walk, the way he dresses and speaks. Everything must appear correct.

The body double of Duke Luca Abele. Despite looking visually identical to his employer, their personalities could not be any more different. He comes from a blue-collar background, and thus hates Luca Abele with a passion, to the point he will aid the player in their efforts to take down the Duke. 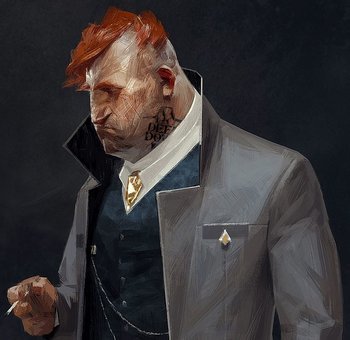 Aramis Stilton. Like the ore he mines, there is something of value underneath that gruff exterior.

A Karnacan mine baron who disappeared before the events of Dishonored 2. His disappearance led the mining district of Batista to chaos as the new Duke seized control of the mines and doubled work for his own profit.

Vasco. Hypatia's trusted assistant. She recruited him out of the academy. The best in his class.

Assistant to Dr. Hypatia, he has vanished in recent weeks. While not quite as altruistic as his mentor, still a good person through and through.
Lucia Pastor

They thought she'd go away if they made her wait. But they found out how persistent she can be.

The head of the miners' family committee. She fights to improve the working conditions in the mines and in the dust district, motivated to do this after losing her husband when the mine he worked in collapsed. Following Stilton's disappearance she has lost an ally who could influence the duke, and the miners' situation got only worse.
Bloodflies 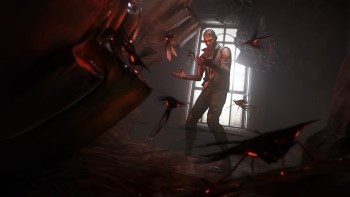 Abbey of the Everyman

When he was a boy, an Overseer stepped out of the mist, wolfhound by his side. Voice was deep and strong as he recited the invocations. Young Liam Byrne was transfixed.
Voiced by: Jamie Hector

Liam Byrne is an acting member of the Abbey of the Everyman, he serves as Vice Overseer in the year 1852. Together with his Overseers, he fights the criminal organization known as the Howlers, as their leader Paolo is rumored to own a black-magic artifact - which is considered heresy by the Abbey.

Martin's successor following the events of Dishonored note Officially he is listed as Campbell's successor, as Martin's election came through blackmail to the rank of High Overseer. Yul Khulan worked closely with Emily and Corvo to restore order to the Empire following the Lord Regent's coup. He still holds the position by the time of Dishonored 2.

The current head of the Ramsey family and the captain of the City Watch. The Ramsey family used to own a very lucrative whaling business, but sometime after the rat plague, the Ramsey family fell on hard times. Mortimer is willing to do anything, even sell out Emily to Delilah, to return to the wealthy life he lost.

One of Emily's bodyguards who is staunchly loyal to her.

Grand Guard Officers
Officers and Veterans of the Grand Guard. Similar to their counterpart from the Dunwall City Watch. They carry pistols and are skilled swordsmen.
Clockwork Soldiers
Creations of Jindosh, these clockwork automatons have either two or four arms, all ending in blades. Wooden plates of armor protect their circuitry. They are equipped with sensors that lets them see in front and behind them.

Paolo. He helped a blind woodcarver cross the street the same day he assassinated a barrister.
Voiced by: Pedro Pascal

The leader of the Howlers gang in Karnaca. He seeks to restore peace, even at the cost of innocent lives. Rumors of Paolo possessing an artifact of black magic attracted the attention of the Abbey of the Everyman, who sent Vice Overseer Liam Byrne and a group of Warfare Overseers to stop the gang leader from using the unknown curio.

If she says she's going to hunt you down and kill you in the street, then that's what she’ll do.
Voiced by: Betsy Moore

One of Paolo's underboss, and a tattoo artist.