Characters / The Order of the Stick: Divine Beings

The Gods as a Whole 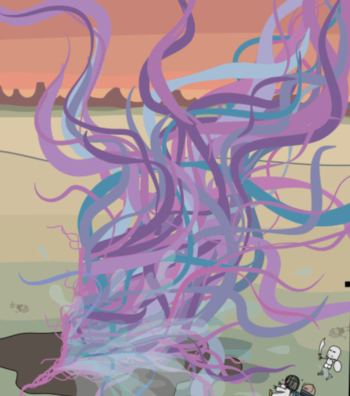 The Snarl (or just a fragment of it), with a few humans for scale.
Lord Shojo: The world took shape, but for every argument, a new snag would develop in the fabric of the world. A new snarl in the threads of reality. And the gods, blinded by their petty squabbles, did not see the Snarl growing every day... Growing more complex... growing more intelligent... growing more hateful.

An immensely powerful god-killing Eldritch Abomination whom many of the main villains wish to harness, each for their own reasons. Born from the dissensions and frustrations of the gods during the first creation of the world. That's the story the heroes have been told, anyway — their own interactions with the rifts to its realm show their information is inaccurate, or at least incomplete.

The pantheon that are primarily worshiped and has domain in the Northern Continent. 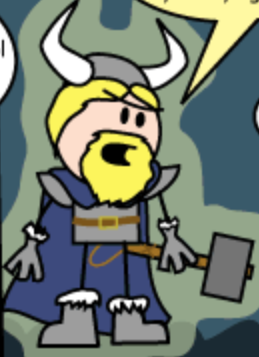 "With my ultimate power of the thunders, I, Thor, smash this entire dungeon to shattered ruins, each piece no larger than a man's fist. Then, I return to Asgard to woo goddesses and drink an ocean's worth of beer. Huzzah!"
Race: God [Northern]
Gender: Male
Alignment: Chaotic Good (probably)

The god of Thunder, a major power of Asgard. Patron god of Durkon and of most dwarves. 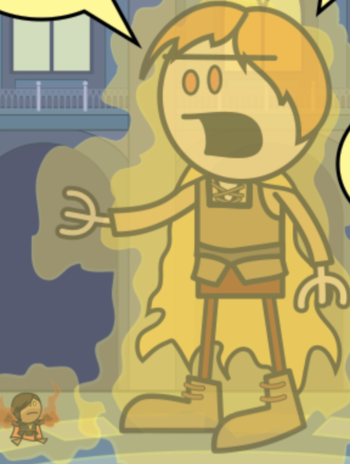 The god of Flames and Chaos. Rival of Thor and father of Hel. Patron god of Hilgya Firehelm and the Greysky Cleric.

The All-Father, god of Magic and head of the Northern gods. Thor's father. 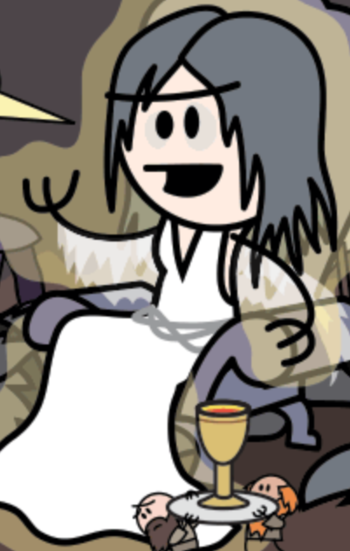 Hel (seated), with a couple of dwarves for scale.
"And now, as High Priest of Hel, you will finally bring this world to ruin — and drive that buffoon Thor to his knees in the process."
Race: God [Northern]
Gender: Female
Alignment: Neutral Evil (probably)

Goddess of the Dead in the Northern pantheon. 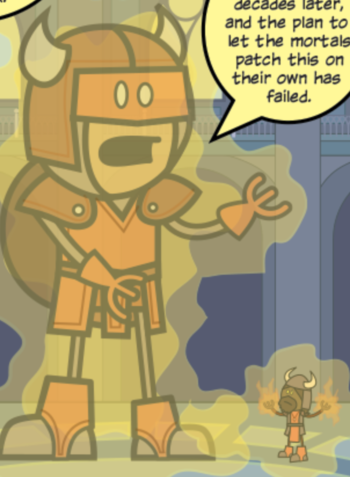 Heimdall (speaking), with his high priest for scale.
"My fellow deities, we must protect ourselves from the danger of which we dare not speak."
Race: God [Northern]
Gender: Male
Alignment: Lawful Good (probably)

The God of the Watch, Heimdall speaks up in support for destroying the world to deal with the threat of the Snarl.

"When I was a mortal monarch, I swore an oath to obey the will of the council on issues affecting all the clans. That promise still stands despite my subsequent death and deification."
Race: Demigod [Northern] (formerly dwarf)
Gender: Male
Alignment: Lawful Good (probably)

The first king of the Dwarves, who was made into a demigod. 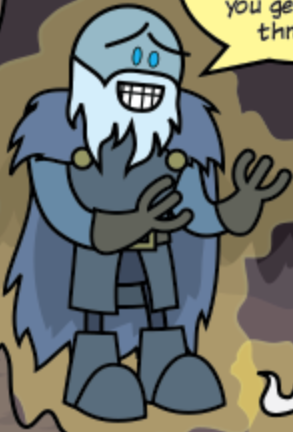 "Do I still get to be your consort when you get Odin's throne?"
Race: Demigod [Northern]
Gender: Male
Alignment: Chaotic Evil (probably)

The demigod of the frost giants. 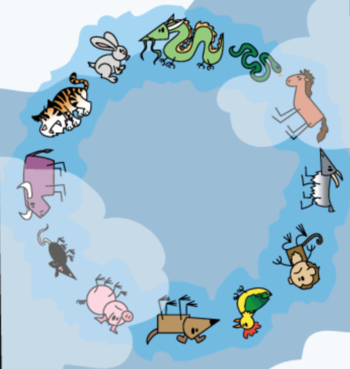 Dragon: We all now know what happens should we ever come to direct conflict over how to run this new world. I therefore suggest that each of our three pantheons be granted special dominion over one-third of this planet, to guide as we see fit.

The pantheon with dominion over the Southern continent, including Azure City. Based on the twelve animals of the Chinese Zodiac: Dragon (the leader of the pantheon), Snake, Horse, Sheep, Monkey, Rooster, Dog, Pig, Rat, Ox, Tiger, and Hare. 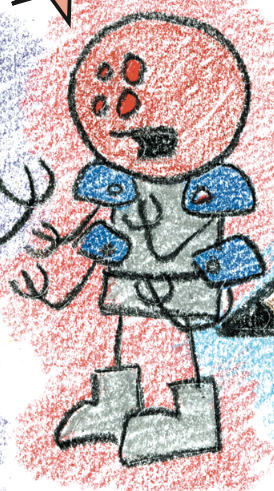 The leader of the Western pantheon (equivalent to Odin or Dragon in this regard). Marduk can be seen in Lord Shojo's tale about the making of the World and the origins of the Snarl. 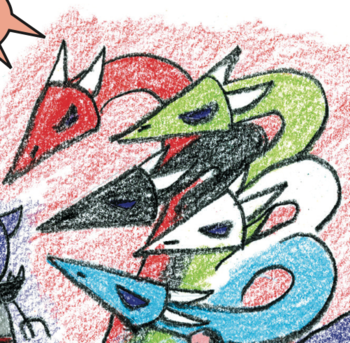 The five-headed dragon goddess, progenitor of all evil dragons. One of the few allies of the Dark One. She grants the Oracle his powers. 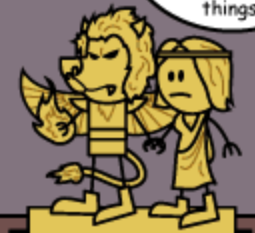 The Western Pantheon's God of Death. Malack is one of his clerics. 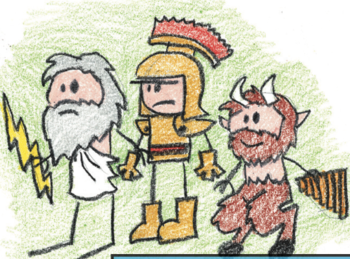 The gods of Olympus, who (as their name implies) ruled the east of the first world. They were the first victims of the Snarl, who killed them all to a man. Known members of their pantheon included Zeus (the top god), Ares, Pan, Apollo, Hades, Poseidon, Demeter and Aphrodite. 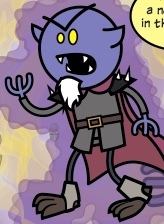 The evil god of all goblinoids. Originally a goblin warlord born with purple skin, he united many tribes in a mighty army threatening the human lands. He was killed through treachery, but had so many followers that he rose to godhood. Now he plans to upset the status quo between PC and monster races by using the Snarl as a bargaining chip. He's working to this end through his true prophet, the bearer of the Crimson Mantle. 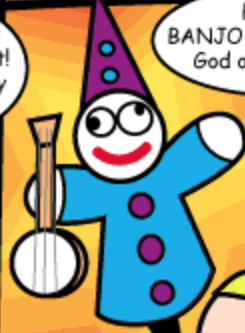 A small hand-puppet carried around by Elan, Banjo is the God of Puppets. Although made up on the spot by Elan one day, Banjo still just barely counts as a god due to the sheer strength of Elan's belief in Him. 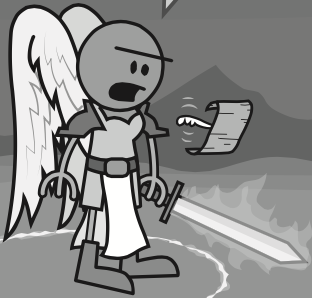 A powerful celestial warrior summoned by Gin-Jun to help him attack the Gorge Ravine outpost and finally find the Crimson Mantle.

For Sabine, see The Linear Guild.

Lee, Nero, and Cedrik: three powerful beings from the lower planes dedicated to uniting the factions of evil. So far this has meant appearing to Vaarsuvius in a desperate moment and granting V unprecedented arcane power by "splicing" V with the souls of three evil mages. Their long-term plans remain mysterious, but they require V to stay alive and involve the Gates.

"See, the first lesson of being 18-inches tall is: Find someone more powerful than you are, and glue your lips to their ass."
Race: Devil (Imp)
Gender: Male
Class: Sorcerer
Alignment: Lawful Evil

An imp, the IFCC's latest employee and former minion of Kubota (and an unknown devil). 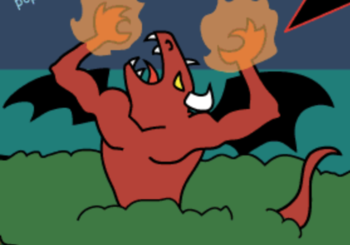 "Geez. What am I doing with my life? Taking orders from an imp? All the guys I went to high school with have gone on to be men of wealth and taste."
Race: Devil (Pit Fiend)
Gender: Male
Class: n/a
Alignment: Lawful Evil

A huge greater devil summoned by Qarr on the orc island to fight the Azurites and the Order of the Stick. He considers taking orders from an imp quite embarrassing, but he has to because of a gambling debt.