Characters / The Order of the Stick: Team Evil 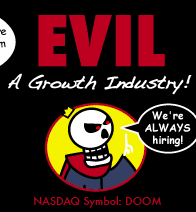 Advertisement:
open/close all folders
Xykon: [To the MitD] We're seriously evil badasses here. I'm a mighty lich sorcerer, Redcloak is high priest of his evil goblin deity, and you — well, we all know how powerful you are.
In General
Advertisement:

An epic-level Chaotic Evil lich sorcerer with dire plans for the world and a serious lack of empathy for living things. He has a constant need for amusement, and often kills people or generally does evil acts to fulfill it, as he can't enjoy coffee (which he loved as a human) any more now that he is a lich. Don't let how at-ease he is fool you: he's stone-cold evil. 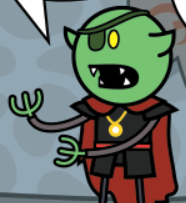 [To his reflection in the mirror]
"It'll all be worth it. You'll see."
Race: Goblin
Gender: Male
Class: Cleric
Alignment: Lawful Evil

A goblin cleric with a bone to pick with human society and a sympathetic backstory. Xykon's right hand man, and the guy who keeps the evil trains running on time. He is not as evil as Xykon, but is far more organised. He is presently the supreme leader of a large army of hobgoblins and undead. He is confirmed as newly level 17 in strip #826

The Monster in the Darkness

The Monster in the Darkness

Exactly What It Says on the Tin, a creature perpetually surrounded by darkness because Xykon wants to dramatically reveal it as his trump card... which hasn't happened yet. He isn't evil and has a childlike personality, but has incredible strength and can laugh off most attacks. 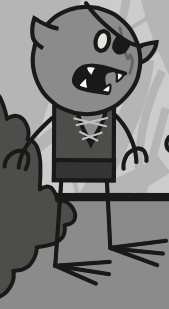 "You know what your problem is, Big Brother? You never seize the moment."
Race: Goblin
Gender: Male
Class: Rogue
Alignment: True Neutral (per

Word of the Giant)

Redcloak's younger brother and, for the lack of a better term, conscience. While Right-Eye only appears in the Start of Darkness prequel and doesn't survive to be in the main story, he's one of the original founders of Team Evil and very important to Redcloak's backstory. 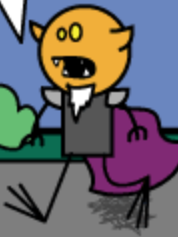 "Truly, there has never been a more impressive display of magic in the annals of warfare."
Race: Hobgoblin
Gender: Male
Class: Unknown
Alignment: Lawful Evil

The General of the hobgoblin Forces, and former second-in-command of Redcloak.

"Thank you, thank you. And thank you, Supreme Leader, for those kind words. I didn't mind the Resurrection spell, either."
Race: Hobgoblin
Gender: Male
Class: Cleric
Alignment: Lawful Evil

Redcloak's hobgoblin second-in-command, following the conquest of Azure City, and now Prime Minister of the newly-formed state of Gobbotopia. 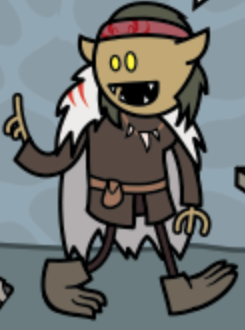 A female bugbear whose tribe lives next to Kraagor's Tomb. They either tame the monsters in the dungeon or harvest them for useful materials, and also enjoy protection from other humanoids thanks to its existence driving them away. She is hosting Redcloak and Xykon, theoretically because her tribe is part of the Dark One's congregation, but mostly because she wants the Tomb to remain well-stocked with useful monsters after they're done.

A large outpost of hobgoblins near the Azurite frontier. They are eventually absorbed into Xykon's army when Redcloak becomes its Supreme Leader.

A hunter working in the Gorge Ravine outpost. During the events of "How the Paladin Got His Scar", he was part of a group of hobgoblins that attempted to spring an ambush on O-Chul's group, but surrendered and was taken captive along with his friend Pangtok after most of their companions were killed. He is far less willing to truly help O-Chul and company than Pangtok is, until a member of the Sapphire Guard needlessly kills Pangtok, at which point Tingtox becomes more willing to do what it takes to avoid a larger-scale war.

"We wouldn't normally do anything about it, except maybe nod when our leaders blame all our domestic problems on you."
Race: Hobgoblin
Gender: Male
Class: Unknown
Alignment: Unknown

A ditch-digger working in the Gorge Ravine outpost. During the events of "How the Paladin Got His Scar", Pangtok joined with a group of hobgoblins who were going to ambush O-Chul's party, but surrendered and was taken captive after most of the group was killed. Although a rebellious captive at first, he becomes much more willing to help O-Chul after O-Chul risked his own life to save Pangtok from drowning in a river. Unfortunately for him, his willingness to help gets him killed by a member of the Sapphire Guard. 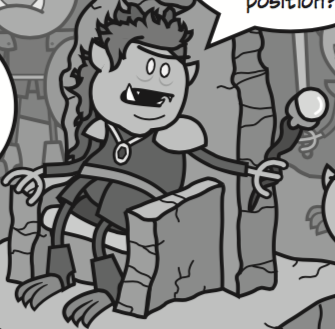 "You disgrace the Dark One with your unnatural aversion to conflict!"
Race: Hobgoblin
Gender: Male
Class: Unknown
Alignment: Unknown

The Supreme Leader of the Gorge Ravine outpost when O-Chul first arrives. He is eager for war with humans, but understands that O-Chul and his team may be of use to him.

"Oh no, it looks like everyone else who could reasonably claim the title of Supreme Leader is dead from a tragic case of improperly preserved cheese. I suppose I will need to take up the burden of leadership myself — for the good of my people."
Race: Hobgoblin
Gender: Male
Class: Cleric
Alignment: Unknown

A cleric who served the previous Supreme Leader of the Gorge Ravine outpost until he saw a chance to kill off his boss and take his title.

"I will kill everyone here and then I will lead our horde to wipe out your precious villages!"
Race: Hobgoblin
Gender: Male
Class: Unknown
Alignment: Unknown

A war leader who commands the hobgoblin army of the Gorge Ravine Outpost.

"Besides, they were the ones who threw ME into prison for being different — for understanding that a pulse is not a prerequisite for being loved! They all got exactly what they deserved!"
Race: Human
Gender: Female
Class: Wizard [Necromancer]/Cleric/Mystic Theurge
Alignment: Neutral Evil

A young mystic theurge recruited during the battle of Azure City to create undead Mooks. Her love of the undead (yes, in that way) and impressive spellcasting ability led her to become Xykon's top enforcer, much to the annoyance of Redcloak.

"...Can I have his shoes?"
Race: Wight (formerly human or goblinoid)
Alignment: Lawful Evil

Tsukiko's sidekick and the face of her undead army. 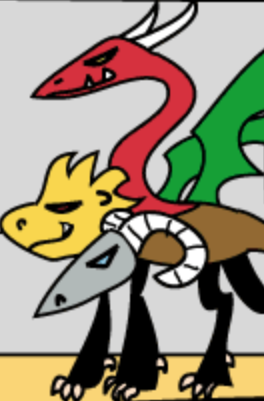 A chimera sent by Xykon to kill the Order of the Stick early on in their adventures. They were jokingly supposed to be a recurring plot-relevant villain, but Belkar killed them before they could finish their "I'll be back!" speech. 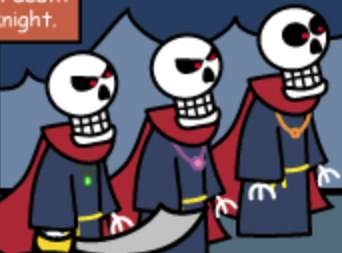 Left to right: Death Knight, Huecuva, Eye of Fear and Flame.
MitD: How did you get them to look exactly like Xykon?
Redcloak: I didn't. They're human skeletons. I put a blue robe on them and called it a night.
Heck, I had to put those colored pendants on them just to tell them apart.

Three skeletal undead — a Death Knight, a Huecuva, and an Eye of Fear and Flame — created by Redcloak for the battle of Azure City, to sow confusion within the enemy ranks by having them look identical to Xykon.