Characters / The Order of the Stick: Greysky City

Main Character Index | The Order of the Stick – Human Party Members – Non-Human Party Members | Team Evil | The Linear Guild | The Order of the Scribble | Azure City | Greysky City | The Empire of Blood | Northern Lands | Animal Companions | Divine Beings | Others
open/close all folders
Advertisement:
Haley: It's a dangerous place where people get killed for having gold in their pockets. Not everywhere on this plane is Happy Sunshine Land, you know.

Haley and Ian Starshine's city of origin; an exaggerated hive of scum and villainy if there ever was one. Visited during the "Don't Split the Party" arc, much to Haley's displeasure.

For Haley Starshine, see The Order of the Stick. 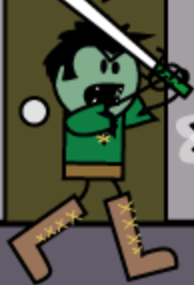 "You have to understand, our entire business model relies on exclusivity. If we allow non-Guild thieves to come and go from the city as they please, we lose our leverage over those who buy into our protection rackets."
Race: Half-orc
Gender: Male
Class: Rogue
Alignment: Neutral Evil

The head of Greysky City's Thieves' Guild. He tries to kill Haley for defecting from the organization. 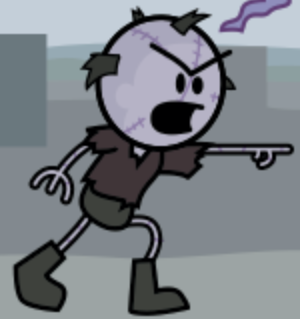 The Rival of Haley and a Goth assassin of the Thieves' Guild. She met Haley when they were both 19 and they've hated each other ever since. She has no levels in Rogue — she steals from people after she kills them.

"I mean, I'd prefer nobody got killed here, but what can you do? The Guild needs to keep its reputation. Nobody leaves, except in a casket."
Race: Halfling
Gender: Male
Class: Rogue
Alignment: True Neutral

"My name is Jenny, by the way! ...Just in case you ever... you know..."
Race: Human
Gender: Female
Class: Rogue/Bard/Sorcerer
Alignment: Chaotic Neutral

A bard employed by the Thieves' Guild; one of the few people Haley got along with at the time. She has a fling with Belkar during his stay in Greysky City.

"A word of advice: If you're going to do business with criminals, don't pick a nickname based on any body part you can't afford to lose."
Race: Human
Gender: Male
Class: Rogue
Alignment: Unknown (probably Chaotic Neutral)

An old blind man who was Haley's friend when she was still in the Thieves' Guild. He used to be called "Eagle-Eyed Pete" before he had his eyes removed after selling Guild secrets to Bozzok's enemies. 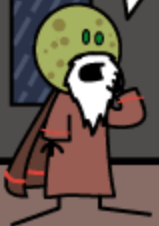 "And indeed, he is not undead — he's a construct, bones animated by an earth elemental spirit bound under my control.
Which I guess technically makes my statement of, 'It's alive,' inaccurate, but I just love saying that."
Race: Human (presumably)
Gender: Male
Class: Wizard
Alignment: Neutral Evil

A wizard specialized in the creation of flesh golems, whom Celia hires, mistakenly thinking he's a cleric. Has a deal with the Greysky City Thieves' Guild to avoid further looting of his estate, Haley having done so already twice in the past. 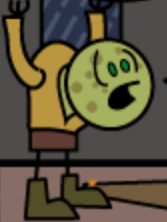 "I'm not even a real hunchback! I stuffed my hump to get this job!"
Race: Human (presumably)
Gender: Male
Class: Unknown
Alignment: Unknown

"Look, I'm happy to help out a friend of Pete's, but you have to make it worth the huge risk I'm taking."
Race: Human
Gender: Male
Class: Cleric
Alignment: Unknown (probably Chaotic Neutral)

A nameless Cleric of Loki that Pete hires to heal Belkar and send a message to Haley's friends.