Characters / The Order of the Stick: The Empire of Blood

Gladiators WILL fight! Prisoners WILL die! And you WILL be distracted from our brutal oppressive regime until Saturday!
ALSO: Bread! Circuses!
— poster

The Legion in the past (as Tarquin remembers). From left to right: Shoulderpads Guy, Malack, Jacinda, Miron, Laurin, and Tarquin.

A group of mainly Lawful Evil adventurers who have been around since a long time, they've now settled down into prestigious positions and play powerful roles of influence in the Western continent. They're "led" by Elan's father General Tarquin, though they don't adhere to his authority seriously and he's only considered leader in the sense that it is his master plan they're all following. And given that we know only Tarquin's version of the story, it might not even be his plan.

An extremely Genre Savvy warlord in service to the Empress of Blood, and father of Elan and Nale.

"Ah, the life of an adventuring cleric. I remember it well. A perpetual struggle to maintain the hit point totals of four or five nigh-suicidal tomb robbers determined to deplete them at all costs."
Race: Lizardfolk (actually snakefolk

A reptilian albino, high priest of Nergal. Spiritual adviser to the Empress of Blood and old adventuring companion of Tarquin. Warning, spoilers are unavoidable below.

"Hannah is a plumber, thank you, and she thinks I'm just a well-connected interior designer. I do this thing we do so she can have a good life away from all this."
Race: Human
Gender: Female
Class: Psion (probably Nomad)
Alignment: Unknown (probably Lawful Evil)

An old adventuring companion of Tarquin and Malack, and their team psion. Currently an adviser for Queen Shvitzer of the Empire of Sweat.

"I wrote you that ransom letter 'cause I figured if he was willing to pay to hold him, you might be willing to pay more to free him."
Race: Human
Gender: Male
Class: Unknown (either Wizard or Sorcerer)
Alignment: Unknown (probably Lawful Evil)

An old adventuring companion of Tarquin and Malack, and served with Tarquin as Chancellor during the reign of Lord Tyrinar the Bloody. Currently serves as an adviser to the Weeping King in the Empire of Tears.

An old adventuring companion of Tarquin. Currently serves as an adviser to the ruler of the Empire of Sweat.

The sixth member of Tarquin's old adventuring party. Currently working with Miron as an adviser to the Weeping King.

Other characters in the Empire

First introduced as an accounts clerk for the Empire of the Blood when dealing with Gannji and Enor. It quickly comes to light that he's more of a "do anything in admin" kind of guy. In short, he's Tarquin's glorified personal assistant.

The Empress of Blood

The Empress of Blood 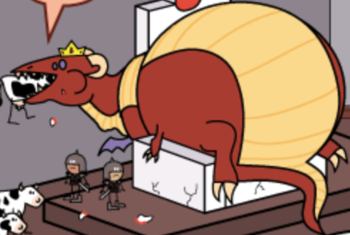 The dragon Empress, with a couple human soldiers for scale.
"No one gets all up in my business, I get all up in THEIR business! OR POSSIBLY THEIR GRILL!!"
Race: Red Dragon
Gender: Female
Alignment: Chaotic Evil 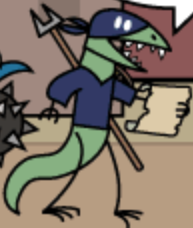 "As a reptile, I've gotten through my whole life without sucking on a teat, I'm not about to start with the government's."
Race: Lizardfolk
Gender: Male
Class: Rogue
Alignment: True Neutral

A green lizardfolk who's wishing he'd never have crossed path with the Order of the Stick, or with Tarquin. The brains of his and Enor's bounty hunter duo. 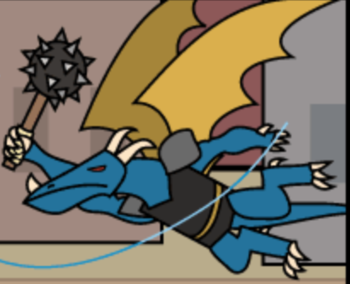 "Well, we screwed up and got yummies anyway. We should do that more often."
Race: Half-ogre/half-blue dragon
Gender: Male
Class: Unknown (probably Fighter)
Alignment: True Neutral

A towering half-ogre, half-blue dragon hybrid. The muscle of the bounty hunter duo. 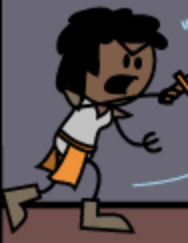 A captain from the Free City of Doom, she appealed to the Empire of Blood for aid when her home was attacked by the Empire of Tears. However, she learned too late what kind of people (particularly the head general) she was dealing with.

The Ambassador to the Empire of Blood from the country of Reptilia. The spies of Reptilia have uncovered Tarquin's plot with the three Empires. He goes to warn the Empress of this under the guise of a diplomatic mission.