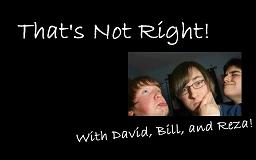 Our Hosts
David: Just freaking squeez off a tube of toothpaste (Beat) Out your asshole!
Bill: Do you think anyone's ever just taken a tube of toothpaste, put it up their buttholes, and then they have their friends come over, like they're sleeping over or something, and they say, "Hey man, you got any toothpaste?" "Yeah!" and they're just like, "Okay, where is it?" Pulls down his pants and says, "Okay, put your toothbrush to my butt!" And he sees a little thing on his asshole, he undoes the cap, and he's like "Ughhhahgargha!" and toothpaste just squeezes out?
*Camera falls*
— 'An example of TNR's brand of humor
Advertisement:

is a Vlog Series about three high school boys: Reza, David and Bill. It is filmed after every school day on their drives home, and documents the odd discussions of the main group (as well as any special guests who sometimes show up) and the weird things that happen in their high school and teenage life in general.

Tropes That Appear in This Work: