This is the supporting character page for the many characters introduced in the first season of Durarara!!: 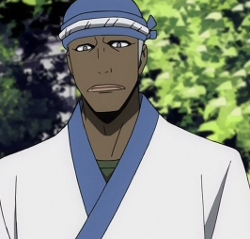 A black, Russian sushi hawker. Being an immigrant, his Japanese isn't very good and his physical appearance frightens some people. Despite this, he's a kind and intelligent man who only wants customers to visit the restaurant.

Affiliated with the Dollars.

The owner of Russia Sushi in Ikebukuro as well as Simon's employer and old colleague back in the Soviet KGB.

The muscle of The Dollars.
Voiced by: Yuuichi Nakamura (JP), Steve Blum (EN)

"If you guys do decide that we're your enemy... if you want a fight, you'll get one."

Leader of a pretty small-time gang consisting of himself, Erika, Walker, and Saburo. Also works as a tile layer. 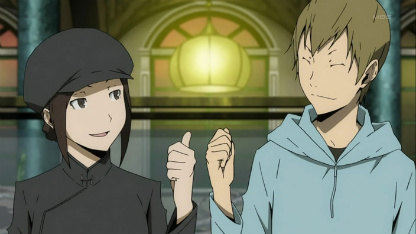 A pair of hardcore otakus who hang around with Kyohei and Saburo. There is more to them than meets the eye.

Both affiliates of the Dollars, by proxy of Kadota. 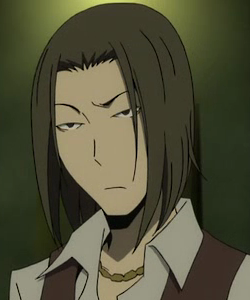 The fourth member of Kyohei's gang, as well as the gang's official driver. Affiliated with the Dollars, by proxy of Kadota. 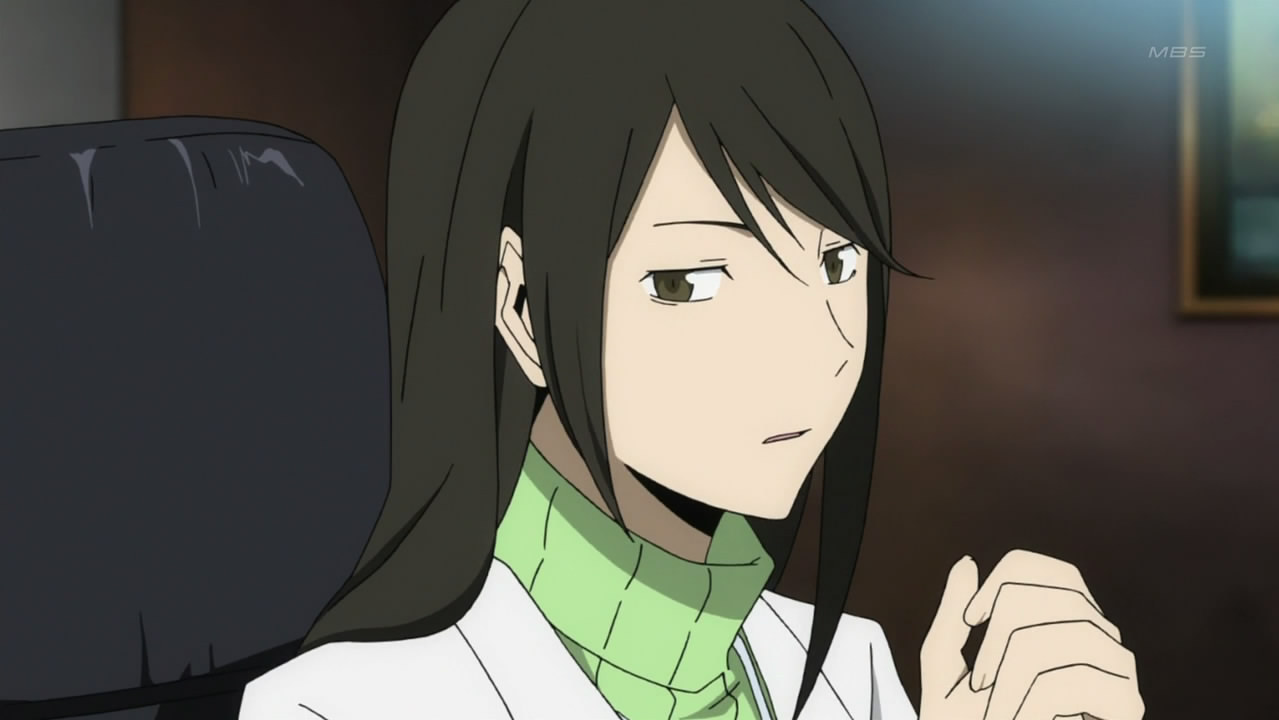 Chief of the 6th lab of Yagiri Pharmaceuticals and older sister of Seiji Yagiri — with whom she has a rather disturbing romantic attachment to. This has repercussions later on when she tries to capture Mikado in order to get a hold of Mika Harima, resulting in the first-ever Dollars meeting and Yagiri Pharmaceuticals' shady business involving kidnapped people being used for medical experiments being exposed, which in turn leads to Yagiri Pharmaceuticals being completely absorbed by the American company Nebula, and her out of a job, at least until Izaya offers her one... 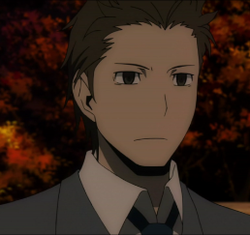 The above mentioned's younger brother. Dropped out of high school on the first day to be with his lover. He has now returned and is now Mika Harima's boyfriend until he retrieves Celty's head once more.

Seiji's girlfriend. At first believed to be Celty's missing head in a new body, she is later revealed to be Mika Harima given plastic surgery to have Celty's face and make Seiji like her. 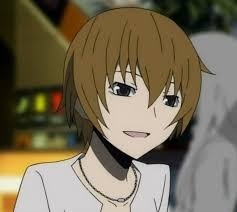 "You'll come back. That's how things are. So you can love all the other girls you want, and I don't care. In the end you'll love me more than you love them."

A young woman currently residing in the hospital who is Masaomi's (ex?) girlfriend and follows Izaya's orders to the very letter. 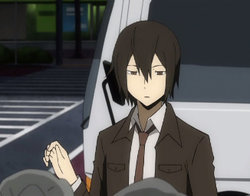 A famous model and actor who got his start after saving a talent scout who made the mistake of attempting to scout his older brother Shizuo. While amazingly talented as an actor, Kasuka's natural demeanor is very robotic and unemotional.

With the occasional mention of his brother aside, Kasuka usually keeps his personal and family life under wraps. Journalists who insist on interviewing his family usually find their cars mysteriously overturned.

Affiliated with the Dollars, by proxy of Shizuo. 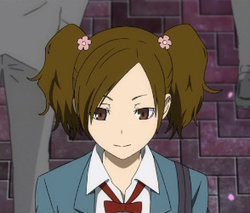 A girl who ran away from home after discovering her father was having an affair and was later kidnapped and rescued by Celty. She was an anime-only character by Narita at first, but then he later used her as a minor character in the novel. 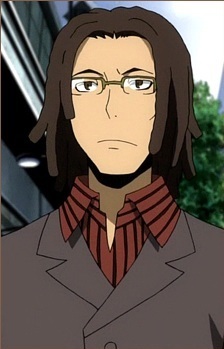 Ikebukuro's resident "Debt Collector" and was Shizuo's Sempai in middle school. He's a pretty nice and normal guy that keeps Shizuo under control when he rages. 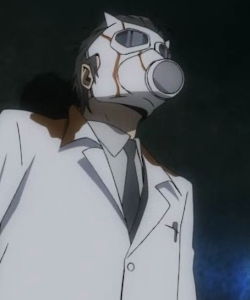 Shinra's father and source of most of his weirdness, Shingen was living in America up until recently, when he decided to return to Japan and impose himself on his son for reasons he has yet to disclose. Believing Tokyo's air to be terribly filthy and unfit for breathing, he opts to wear a gas mask 24/7. 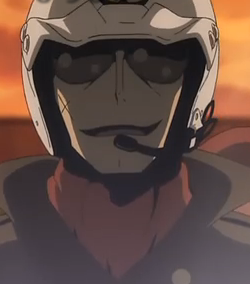 A motorcycle cop brought in to Ikebukuro to take down Celty. Often just a little bit too into chasing down suspects, to the point that he causes as many accidents as he prevents. 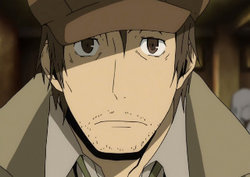 The father of Haruna and a news reporter writing a magazine story on the strongest person in Ikebukuro (i.e. Shizuo).

A high school student who mysteriously transferred out of Raira Academy after an incident involving her and Nasujima.

A teacher at Raira Academy who takes an interest in Anri. 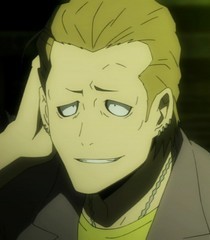 A jerkass member of the Yellow Scarves who becomes an antagonist in the second half of the series. 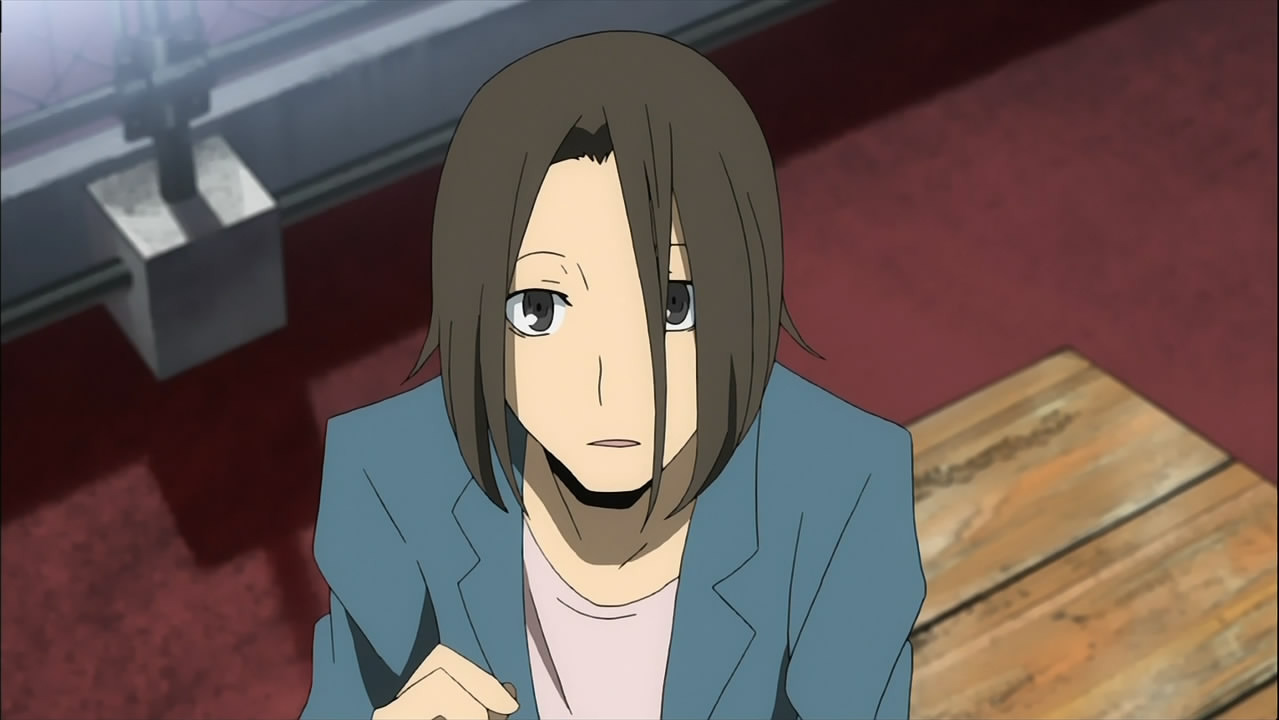 A fellow classmate of Masaomi, Ryo Takiguchi is just an average joe who likes composing his own music, playing on a harmonica, and just so happens to be a member of the Dollars. He is later targeted by members of the Yellow Scarves, who beat him up horribly and leave his unconscious body next to graffiti as part of their self-declared war against the Dollars. He considers leaving the organization afterward, but just can't bring himself to do it in the end, and sticks around to help out. 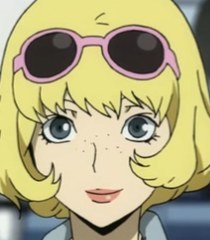 A blonde foreigner who is introduced in the anime version as another member of Dollars. Her real name is unknown, although her username is called Siri. She carries around a "Most Desired Object" sign in Episode 8, asking people to write down what they're looking for in a journal, and later helps Anri escape from Horada and his gang. 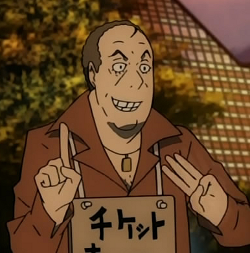 An illegal immigrant from Italy. He is friends with Dotachin Kyohei's gang. Affiliated with the Dollars. 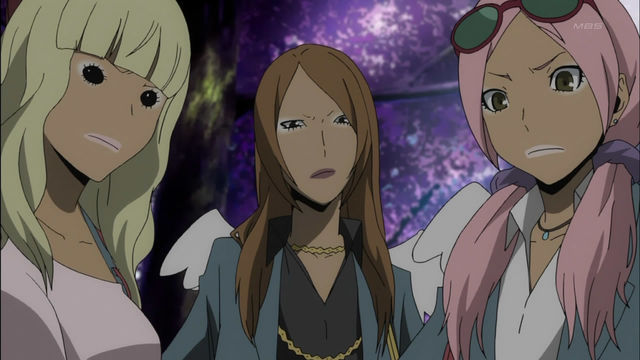 A trio of ganguro girls from Raira academy who frequently picked on Anri, until the Slasher attacked them. 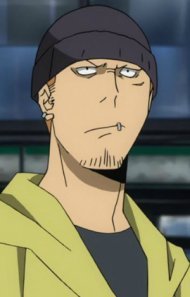 The boyfriend of one of the Ganguros'. He is also a fake member of Dollars. 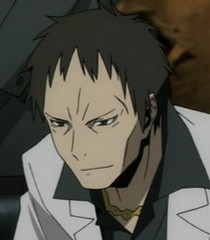 An executive of the Awakusu-kai, Haruya Shiki is also one of its youngest members. He is the only Yakuza who uses honorific speech at all, except to his subordinates, and is the one responsible for dealings with the informant, Izaya. He is briefly seen in episodes 12.5 and 15 of the anime's first season, in the latter when the reporter Shuji Niekawa interviews him about the strongest person in Ikebukuro. 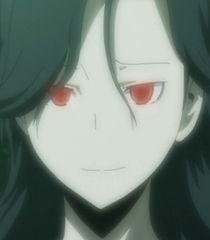 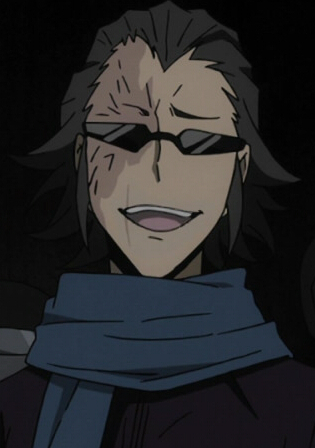 The leader of Blue Squares that got into a confrontation with the Yellow Scarves. He was the one that kidnapped Saki and broke her legs in order to get Kida to face his gang directly. He is foiled by Kadota's gang who turn on him and rescue Saki. He is then arrested and convicted thanks to Saki's testimony. After many years, he's out of jail and he wants revenge on the people who betrayed him and ruined his life. 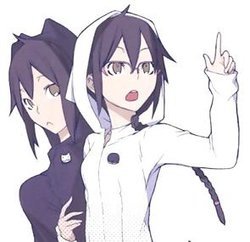 The younger twin sisters of Izaya.