This is the character page for the many characters introduced in the second season of Durarara!!.: 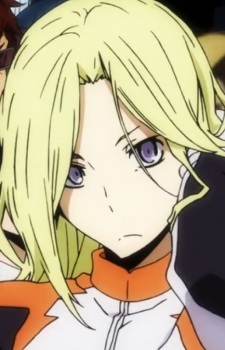 A former Mafiya assassin and Blood Knight that fled to Ikebukuro, taking a truck filled with guns along with her. 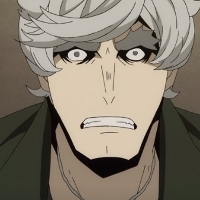 Vorona's longtime partner in crime. He ran away with her to Japan, where they were temporarily hired as mercenaries in Ikebukuro for Izaya and Yadogiri Jinnai. He is an enormous man with tremendous strength, although he isn't very intelligent. 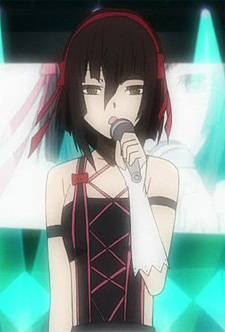 A popular idol singer who lives a double life as the serial killer "Hollywood". 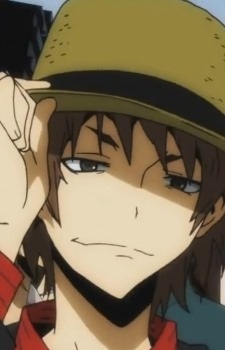 Leader of the Toramaru biker gang who comes to Ikebukuro after some members of his gang were allegedly attacked by the Dollars and involved innocents in the crossfire. Also a shameless manwhore, and rarely seen without multiple women hanging off of him. 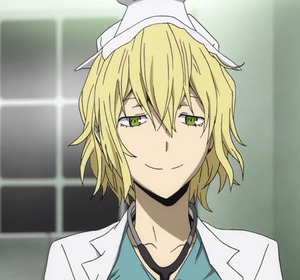 A researcher from Nebula, and Shingen's new wife. 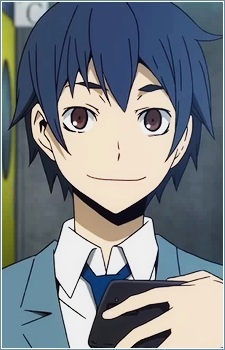 An unusually young-looking freshman that quickly latches onto Mikado. Also the leader of Blue Square and Mikado's second-in-command. 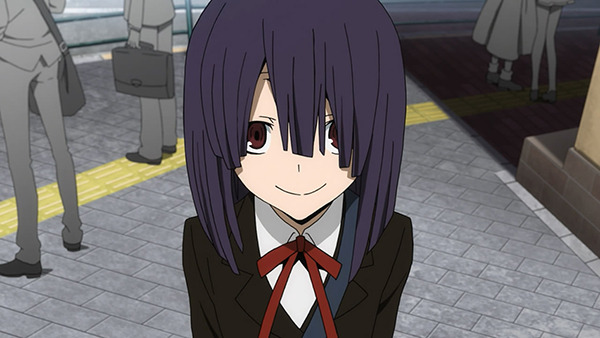 The ten-year old daughter of Mikiya and granddaughter of Dogen, who is the current head of the Awakusu-kai. After learning on the Internet that her family is running a criminal organization, she became heartbroken and ran away from home. She soon met Izaya, who tricked her into thinking Shizuo was an enemy, causing her to try and kill him with a modified stun gun. Afterward, when Shizuo rescued her from kidnappers, she realized he wasn't a bad person and befriended him. 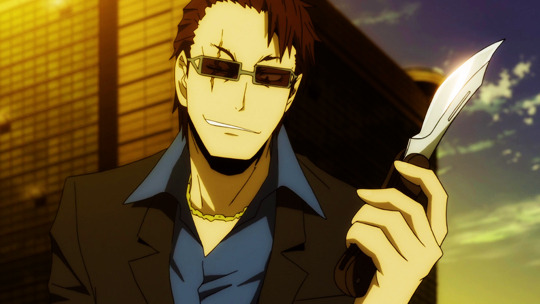 A high-ranking executive of the Awakusu-kai. Akabayashi is easily recognizable by his gaudy sense of fashion and the large scar running through his right eye. He is known as the Red Demon of the Awakusu and has ties to Anri. 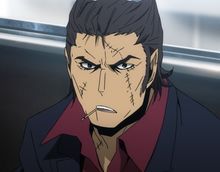 Another executive of the Awakusu-kai, he is known as the Blue Demon of the organization. Not much else is known about him, except that he has a rivalry with Akabayashi and is really big. 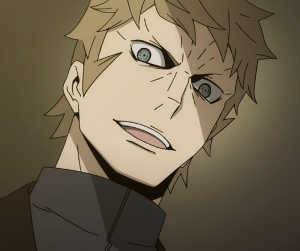 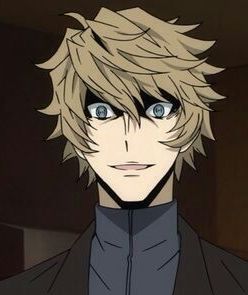 "The Philosophical Killing Machine" and the 7th most feared assassin in Russia. He was hired by Shingen to capture the serial killer known as Hollywood. Ends up badly beaten by Shizuo after he uses his suitcase as one of his improvised weapons, necessitating facial reconstruction. He afterwards serves as one of Shingen's affiliates for the remainder of the series. 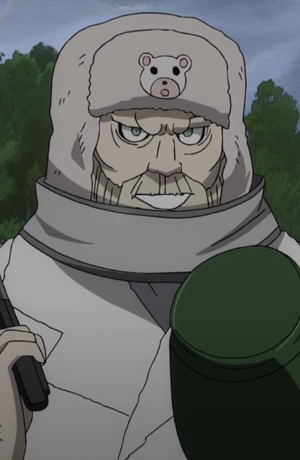 The leader of the weapon dealing organization that Vorona and Slon used to be part of. Gets along well with Drakon, Vorona's father, despite suffering frequent insults of his intelligence. 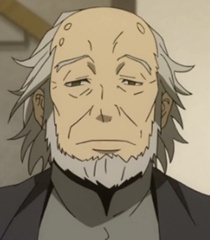 The former head of Yodogiri Shining Corporation. Not much is known about him. 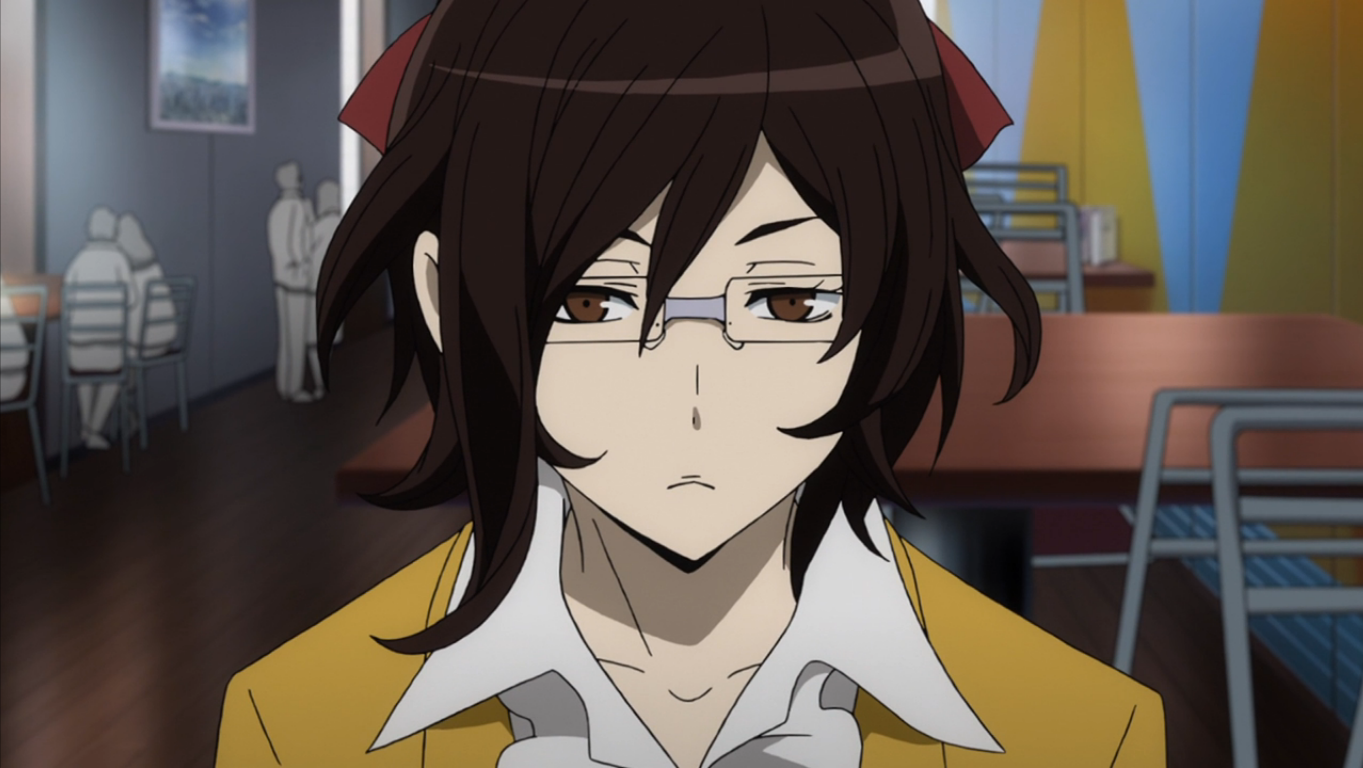 A calm and quiet woman who works as Yodogiri Jinnai's secretary. 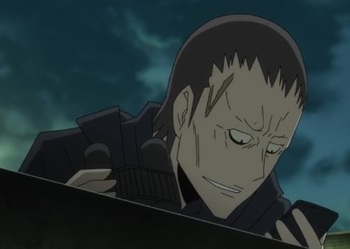 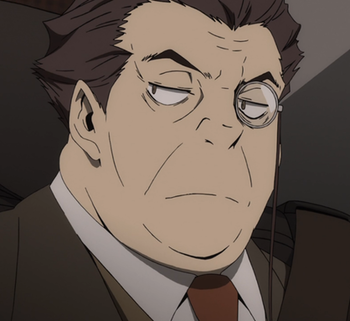 The head of the Yagiri Pharmaceuticals, and Seiji and Namie's uncle and caretaker. He got Celty's head from Shingen and felt in love with it. Nebula decide to own his company to get the head but Namie had already taken her to Izaya. For this reason, Seitarou made contact with Jinnai Yodogiri in order to get the head before Nebula, thus kickstarting the events from the second season. 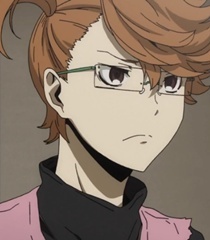 A young girl who formed a suicide pact with Izaya but was tricked by him. 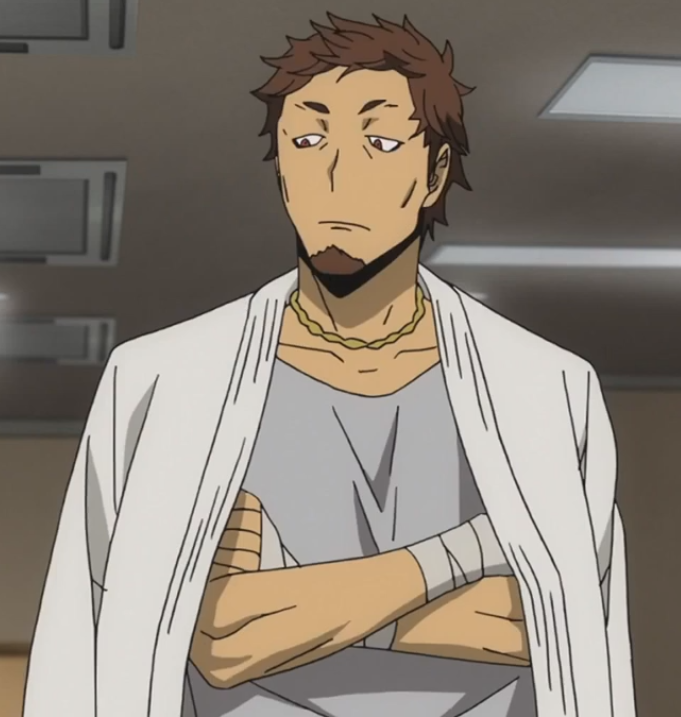 Mairu's martial arts mentor. A lazy, thirty-year-old man, Mikage's older brother, and has a grudge against Izaya. He is also a bit of a pervert. 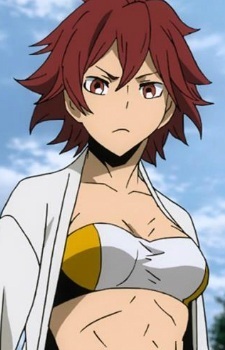 One of Izaya's followers for his new "army." For some reason, she dropped out of high school. She is also a mentor at the gym that Mairu regularly attends, along with her brother Eijirou. 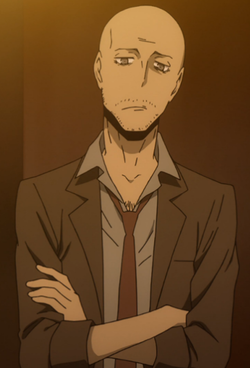 One of Izaya's followers and a former executive of the Awakusu. 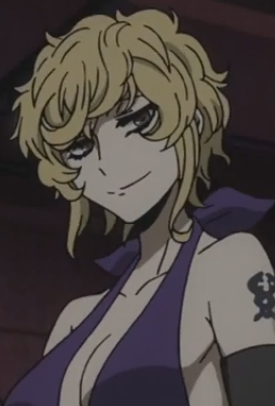 A mysterious woman who works for the "Owner" of the Amphisbaena. She is incredibly sadistic and revels in torturing people, leaving them entirely at her mercy. She often begins with sensory deprivation by covering their heads with linen bags. Her current victim appears to be Izaya Orihara. 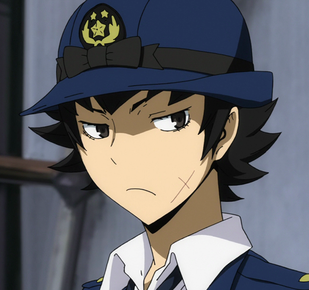 A policewoman in Ikebukuro and Kinnosuke Kuzuhara's niece. 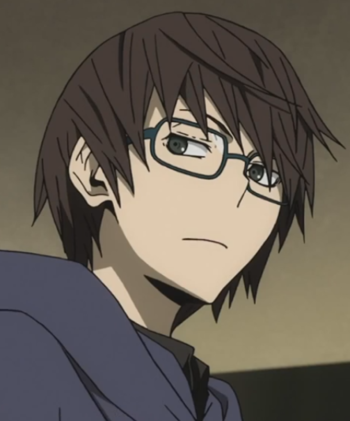 The second in command of the Heaven's Slave drug cartel. In Durarara!! SH, he's joined up with Earthworm.