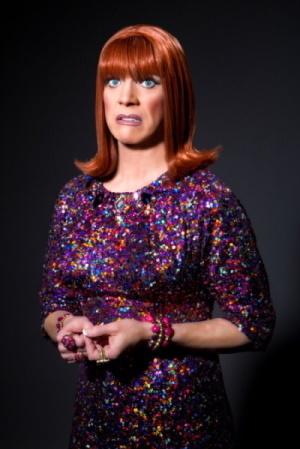 Miss Coco Peru (born Clinteon Leupp) is an American Drag Queen who started in the 1990s in New York City, and has acted in television and films. She now lives in Los Angeles where in her signature copper red bubble flip wig she's gained viral video fame through her love of pannetone and her disgust of the people around her. When she's not hosting one woman shows or doing stand up, she can be found on YouTube wandering around stores complaining about the stuff being sold and inconsiderate shoppers and their children. If only she had her Tension Tamer tea...

She's also hosted a series of interviews with several gay icons over the years in her "Conversations with Coco" web series including Bea Arthur, Liza Minnelli, Lily Tomlin, and Jane Fonda.