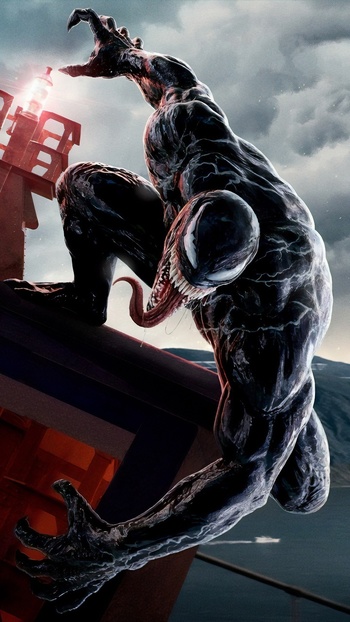 Venom, the de facto face of the franchise so far.
Advertisement:

Sony's Universe of Marvel Characters (SUMC for short; also referred to as Sony's Marvel Universe and the SMU, or Sony Pictures Universe of Marvel Characters - SPUMC) is the unofficial name for the Shared Universe of live-action Marvel Comics-based movies made by Sony Pictures/Columbia Pictures. The films are based off of superheroes, anti-heroes, anti-villains, villains and supporting characters from the Spider-Man franchise — more precisely, all the Marvel characters that Sony has the rights to, which indeed amounts to the extended Spider-Man universe — and will be interconnected to each other.

The main character of the setting is Venom, who appeared for the first time on film since Spider-Man 3, finally receiving a standalone film after years of Development Hell. The setting is a Spiritual Successor to the Amazing Spider-Man film series, which also tried to launch a Shared Universe off of Spider-Man properties, but ultimately fell short due to The Amazing Spider-Man 2 relatively underpeforming and a series of issues happening with Sony Pictures in 2014-2015 that led to the shuttering of the setting. These movies take advantage of Sony's existing hold on the Spider-Man IP while the company loans their lead character (and much of his supporting cast) to Marvel Studios, much like how they were able to make Spider-Man: Into the Spider-Verse without any involvement from Marvel Studios.

Although it was initially believed that Tom Holland's Spider-Man would not be appearing in these movies, Sony revealed that he would be introduced into the setting in August 2019, when the company temporarily announced an end to the Marvel Studios partnership that resulted in the previous two Spider-Man films. The following month, after Sony and Marvel Studios renegotiated the deal to continue sharing the Spider-Man IP, Marvel Studios president Kevin Feige confirmed that the character of Spider-Man will appear in both this universe and in the Marvel Cinematic Universe. With that in mind, Spider-Man is expected to play a supporting role in these films as opposed to being a lead character, due to his ongoing MCU series.

The SUMC has an unusual relationship with the MCU, which it was inspired by. While Sony initially stated that the films would be unrelated — but somehow adjacent — to the MCU, Continuity Nods featured in Morbius have indicated that these movies are tied to the MCU iteration of the Spider-Man IP. As such, Sony's Marvel movies can reference events related to the wall-crawler's MCU standalones, but they are not expected to reference other aspects of the MCU or feature characters outside the ones introduced in those Spider-Man movies. Likewise, it's expected — though not confirmed — that the MCU could treat Sony's movies as Broad Strokes with relation to the MCU's overall story arc, but it remains to be seen how Marvel Studios will approach the characters that Sony introduces. Meanwhile, Kevin Feige has indicated that Sony's spin-off plans aren't necessarily indicative of the MCU's future, indicating a degree of separation between the two franchises. Ultimately, Sony had to confirm that the two franchises remain officially separate as of 2021.

Sony, looking to make the most of their library of Spider-Man character to use in spin-offs, are invested in making use of the 900-ish characters that they have the license to use (from familiar characters and deep-cuts) in order to bring characters that Marvel may otherwise ignore to the big screen. However, they have postponed development on certain projects in favor of cooperating with Marvel Studios. One example of this was a planned Mysterio standalone, which was ultimately shelved in favor of having the character appear in Spider-Man: Far From Home.

Tropes demonstrated by Sony's Universe of Marvel Characters include: