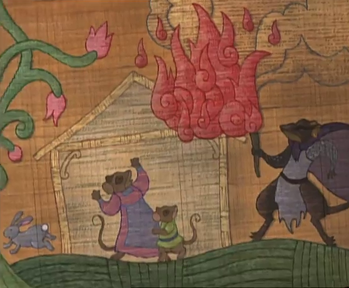 "As the hordes of Cluny the Scourge have moved southwards over the past six years, I have gathered intelligence of other incidents: a farmhouse set alight, later that same year... piglets, an entire litter of them eaten alive by rats... [...]"
"Laugh, yes laugh all you like, but stay hidden while you value your miserable lives. I am Tsarmina, Queen of the Thousand Eyes. Before I am finished with Mossflower, every creature who defies me will wish that its mother had never given birth to it. The crying and the dying will be loud and long. Now let me hear you laugh at that!"
—Tsarmina Greeneyes, Mossflower
Advertisement:

The residents of Redwall Abbey are constantly threatened by various vermin, who are determined to take over the land and enslave everyone there. Despite numerous evil murderers and slavers, there are still some who stand out as the vilest of the lot.