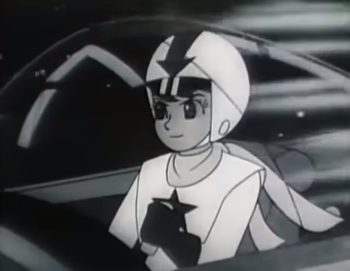 Rainbow Sentai Robin is a science fiction manga created by Shotaro Ishinomori (Cyborg 009) that was first published in Shōnen Magazine on a short run from January, 1965 to March of the same year. It was subsequently adapted into a black-and-white anime by Toei Animation with assistance from Fujiko Fujio's Studio Zero and aired on TV Asahi from 1966 to 1967 for 48 episodes.

The plot follows Robin, the son of Dr. Polto, an alien scientist from the dying planet of Palta who was sent as a spy to enable the conquering of Earth for its plentiful resources. However, Dr. Polto found himself falling in love with a human Japanese woman and abandoned his mission. But fearing that the forces of Palta would track him down and possibly endanger the lives of his family he builds a team of robots to protect Robin.

Notably one of the first anime series for Toei a young Hayao Miyazaki worked on.