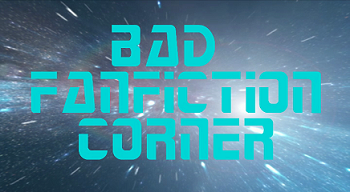 The opening logo in the Star Trek X episodes.
"Fanfiction: the final frontier. These are the exploits of the web series Bad Fanfiction Corner, her thirty year mission to seek out ridiculous fanfiction, to build new criticisms, to make fun of everyone in the universe; to boldy go and do what no webshow should ever do again."
— Intro Narration, Star Trek X Part 1

A webshow by Reputable Dubbing Pictures built around reading and riffing on bad fanfics, often centered around the Sonic the Hedgehog universe (as it is read by mostly members of the Sonic Paradox community).