Series / The Hitchhiker's Guide to the Galaxy 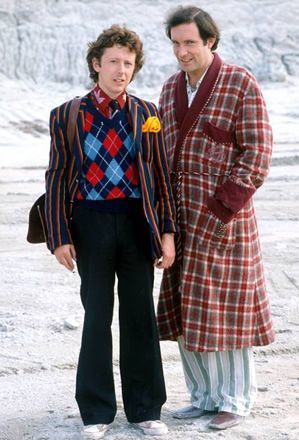 The answer to the Great Question Of Life, the Universe, and Everything... is Forty-two.

The Hitchhiker's Guide to the Galaxy (1981) was a fairly straight translation of the radio series/book series by Douglas Adams into miniseries form, keeping much of the original cast, including Simon Jones as Arthur Dent, Peter Jones (no relation) as The Book, Mark Wing-Davey as Zaphod Beeblebrox and Stephen Moore as Marvin. David Dixon replaced Geoffrey McGivern as Ford Prefect, and Sandra Dickinson replaced Susan Sheridan as Trillian. As with its earlier incarnations, it followed the exploits of a hapless Englishman who is rescued from Earth by an interstellar journalist, seconds before the planet is demolished to make way for a bypass.

Its cult following admires it for its characters, dialogue and ingenuity, whilst admitting it is one of the more technically inept creations ever put on television; it was notorious even in its day for Zaphod Beeblebrox's animatronic second head, which looked like a lump of putty with a wig on. Far more effective are the amusing illustrated excerpts from The Book, which used traditional animation techniques to imitate complex computer readouts.

This series also cemented a number of the visual aspects of the Series Franchise which had not, at the time, been canonized in the books: most notably, it was not until writing the television series that Douglas Adams realized that Arthur Dent had spent the entire adventure in his pyjamas.

For all versions of the story, see The Hitchhiker's Guide to the Galaxy.