"Your one stop shop for the shows your little sister will love, now with 20% more Popples!"
—The Retroist, commenting on a print ad for Kideo TV. 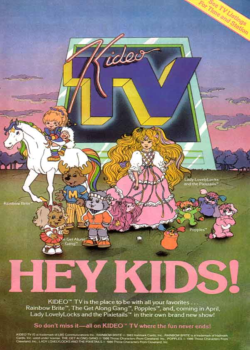 Kideo TV was a 1986 syndicated anthology packaging by DiC Entertainment and LBS Communications, which premiered in April of that year. The show was hosted by four youths in auto racing attire with chassis on their shoulders. They included a boy and a girl who were the "good kids" of the show, and they taught lessons to the reckless Fast Lane, a fiery-haired teen with a flame-decorated chassis on his shoulders and the chubby, impressionable Couch Potato. In one episode, Couch Potato started drinking beer with a number of other kids (off-screen) so they can all vomit on an old lady's plant. Couch Potato admits that to him, beer tastes like soap, so they easily persuade him to stop drinking, and he vows to tell the woman why her plant died. These sketches were under five minutes in length, and the youths also did commercial bumpers.

Not to be confused with the Kideo band from another '80s kids show, All Kids Can Rock And Roll, a Lorimar company, a website or Kidd Video.