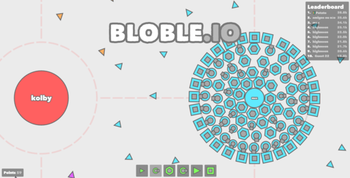 A just-spawned player (left), next to a fully developed one (right). Luckily, he has an unbreakable shield to avoid Curb-Stomp Battle.
Advertisement:

There, the players control static bubble-like bases, which are surrounded by multiple rings where buildings can be placed. The inner ring is reserved for generators to produce all-important power, the outer ring is for the defensive walls, and the space in between can be divided however you wish between the various turrets, barracks that spawn troops, houses that raise your troop cap, and the armory that researches upgrades for them.

Troops can be selected and sent out to fight the other players; doing so will also immediately dispel the otherwise completely impermeable shield that protected your base till that point. Thus, it is impossible for those topping the leaderboards to immediately crush those who just joined the game, while the players are encouraged to build up their base as much as possible before trying offensive moves themselves.

This game was also the one Sidney worked on the least, as it was only actively updated for about a month before he moved on to his other projects, whereas most other game he made received updates for at least a year. He spoke of potentially remaking Bloble so that it would have optimised code, instead of adding features to this one. Nevertheless, even the current version is still a unique experience in the ioGame world, and there are still decent numbers on its servers.

You can learn the basics on its wiki here