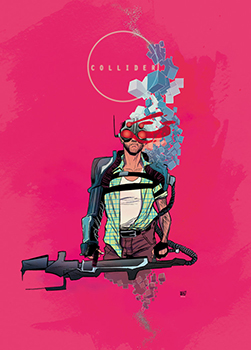 FBP: The Federal Bureau of Physics, previously known as ''Collider''

is a Science Fiction comic book by Simon Oliver and Robbi Rodriguez, and is published by Vertigo Comics. The series centres on a world similar to our own, where a series of strange and unexpected phenomena have led scientists to conclude that the laws of physics aren't as carved in stone as we had believed. However, humanity adapted to the changes, and the new paradigm of unpredictable physics became a part of our normal, everyday lives, particularly to the creation of a new government agency with the mandate of “to prevent and protect.” Its official title: The Federal Bureau of Physics.

What was extraordinary soon became ordinary, a part of people’s daily lives. They move on and do what people have always done: survive. But even that new status quo is now under threat. Things are getting worse, and it falls to Special Agent Adam Hardy and his FBP team to figure out what’s going on, before it’s too late…