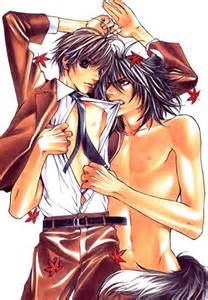 Insert appropriate "give a dog a bone" joke here.
Kuro was just a normal dog who longed to be with a human named Ukyo, so much so that he prayed every night to the moon to allow this to be, even if it meant casting aside his pride of being a dog. Eventually Kuro gets his wish, and not only becomes his beloved Ukyo's pet, but gains the power to speak to him, and even to change his shape into that of a hunky human male. Suffice it to say, Kuro is unable to hide his excitement and quickly escalates things sexually with Ukyo (not that Ukyo puts up that much of a fight), and from that point forward the two slowly begin to learn from each other. Kuro, how to behave as a human in order to be with his lover Ukyo, and Ukyo, dealing with the mixed feelings he has in being together with this studly man who was once (and still is) his pet dog.

Man's Best Friend, part of the Inu Mo Arukeba series is an explicit yaoi manga from the creator of Wild Rock, Kazusa Takashima and is published in English by Blu Manga, the boys' love publishing division of Tokyopop. In addition to the three chapters dedicated to Ukyo and Kuro, there are also two more unrelated stories:

Mata, Natsu ga Kita and Pinpoint Lovers are about Kentaro and Kasumi, who meet each other again after a decade. Kentaro made a promise of waiting for Kasumi to return ten years before, which at the time he thought that Kasumi was a girl.

Kingyo Hime is more similar to Man's Best Friend in that it involves a guy, Keisuke, who rescues a goldfish from some kids, and finds out that the fish transforms into a man to thank him for rescuing him.

Man's Best Friend has absolutely nothing to do with the American horror movie of the same name.