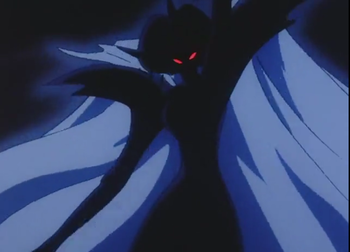 Lady Debonair haunted Hikaru's nightmares and she will haunt yours too.
While most people think of the Rayearth OVA whenever they hear "Magic Knight Rayearth" and "Nightmare Fuel" in the same topic, Rayearth does not limit anything scary in it to the OVA. While it may appear to be a light-hearted shoujo adventure fantasy series, Magic Knight Rayearth does feature dark and scary stuff in it, especially towards the end of the first season/manga series, and far more so throughout the second, especially in the anime. CLAMP clearly believes that young girls can handle dark subject matters. So how could a shoujo fantasy epic scare you? Let's find out.