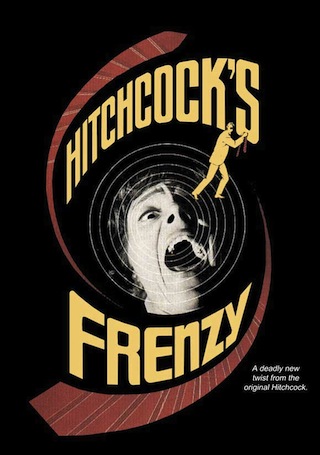 Dig this crazy mood I'm in
Listen to my heart as it starts to spin
"Mr. Rusk, you're not wearing your tie."
— Chief Inspector Oxford
Advertisement:

The penultimate film directed by Alfred Hitchcock, Frenzy (1972) was adapted by screenwriter Anthony Shaffer from Arthur La Bern's 1966 novel Goodbye Piccadilly, Farewell Leicester Square. It's notable as one of the rare films Hitchcock shot in his native Britain after moving to Hollywood in 1939.

Our "hero" Richard Blaney (Jon Finch) is down on his luck; just as he's fired from his job at a London pub, his estranged wife Brenda (Barbara Leigh-Hunt) becomes the latest victim of a necktie-wielding rapist and Serial Killer. Because of a witness's mistake, Blaney is now the prime suspect, with only a few of his friends believing in his innocence. When he's left without his allies and implicated by actual murderer Bob Rusk (Barry Foster), Blaney is left to the mercy of the police, led by Chief Inspector Oxford (Alec McCowen). Will Oxford discover the evidence to catch Rusk and clear Blaney's name?