Visual Novel / eden*: They were only two, on the planet. 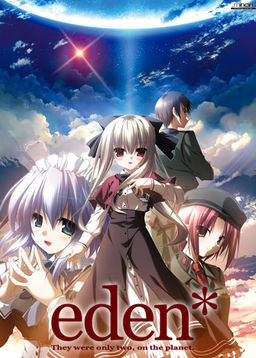 A Kinetic Novel created by minori, who also created ef - a fairy tale of the two..

In the future, a red star in the sky signifies impending doom for planet Earth. To prevent the end of the world, genetically modified humans with staggering intelligence called felixes were created. The most intelligent of these, Sion, engineered the plans for the Earth Evacuation Project, and humanity was gradually sent into space to save them from Earth's destruction and to continue the footprint of humankind.

When the game begins, the fate of Earth draws closer. Sion resides at a research facility on a lone island, continuing her work. Our protagonist, a warrant officer named Ryou Haruna, is assigned to guard her, and from there, a mysterious and sad story unfolds.