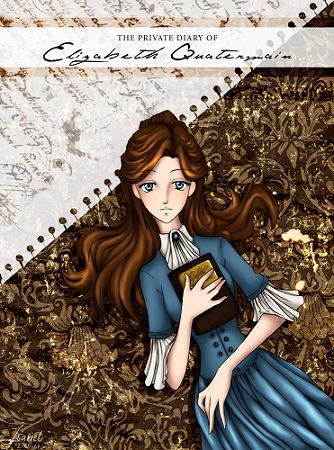 The Private Diary of Elizabeth Quatermain is a five-part fanfic series based on The League of Extraordinary Gentlemen (the film, not the graphic novel). It follows the adventures of the non-canonical title character, daughter to Sean Connery's character Allan Quatermain, and is told entirely through entries in her diary.

Following the events of the film, Elizabeth is introduced to the surviving members of the League. Through a series of somewhat bizarre circumstances, she's not only about to lose her home in London but has also been sent a letter directing her to solve an incomprehensible mystery. The League takes her under their collective wings and as the series progresses, helps her to break out of her shell. There are a few mysteries, some romance, and a lot of historical detail. The author, Lady Norbert, devotes the last chapter of each installment to a pseudo-FAQ in which she attempts to explain certain facts (or Blatant Lies) and give credit to other people.

(originally intended to be the only volume) carries the series title as its own. The subsequent volumes were given titles of their own prefaced with the series acronym, with the final installment was completed in early 2008. The other volumes are:

In addition to the five main volumes of Elizabeth's diary, there are numerous one-shot side stories, showing certain scenes from the points of view of the other characters; volume four even has an entire companion volume

told from the viewpoint of Rodney Skinner, the invisible man. There is also Allan Observes

, the Bridget Jones-styled comic edition in which Elizabeth's father Allan comments - quite harshly at times - on the events of the stories from the afterlife.

The whole series can be found at Fanfiction.net

As of spring 2015, the series is being given the podcast treatment at Good Fanfiction Theatre