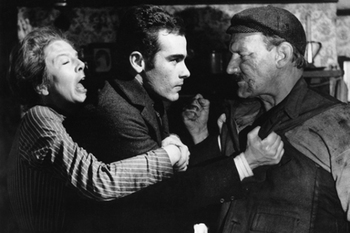 This happens a lot in this family.
Advertisement:

Sons and Lovers is a 1913 novel by D. H. Lawrence. One of Lawrence's more personal works, it's about a working-class English family in a miner’s town.

The story follows the lives of the Morel family. Gertrude Morel is stuck in an abusive marriage with Walter Morel, who she despises for his low-class tendencies and his alcoholism.

With no more love to give to her husband, Mrs. Morel's love and tenderness goes to her children: William, Annie, Paul, and Arthur. But especially to her two older boys, William and Paul. However, her love, although comforting and welcome, becomes a burden to the boys whether they realize it or not.

The book as been adapted several times. Most notably the 1960 film version directed by famed cinematographer, Jack Cardiff, in which he was nominated for Best Director, and the film for Best Picture. It stars Dean Stockwell, Wendy Hiller, and Trevor Howard.