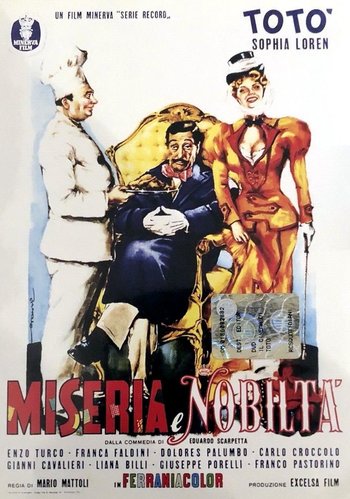 Poverty and Nobility (Miseria e nobiltà) is a 1954 film from Italy directed by Mario Mattoli.

It is an adaptation of an 1888 play by Eduardo Scarpetta. Felice and Pasquale are two men in Naples, trying to earn money as, respectively, a scribe for the illiterate and a photographer. They are not doing very well; at the start of the film they are five months late on the rent for the threadbare little apartment their families share. They haven't eaten in three days and are constantly sniping at each other.

Into this Black Comedy, Played for Laughs existence comes one Count Eugenio. Eugenio is in love with the luscious Gemma, a ballet dancer (Sophia Loren, just breaking out as a star of Italian cinema). Gemma is a commoner, so even though her family is wealthy—her father Gaetano is a former cook, now Nouveau Riche—Eugenio's father refuses to approve the marriage. Eugenio is still determined to marry Gemma, however, so he needs to impress Gaetano.

Eugenio recruits Felice and Pasquale to impersonate his family, so he can get Gaetano to consent to the marriage. Pasquale will pretend to be Marquis Ottavio, and Felice will play Eugenio's uncle, the Prince of Casador. Pasquale's wife and daughter will also impersonate nobility—and Pasquale's daughter Pupella happens to be in love with Gaetano's son (and Gemma's little brother) Luigino.