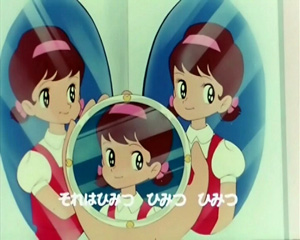 The tale of a girl and her mirror.
Advertisement:

Himitsu no Akko-chan (Akko-chan's Secret) is one of the first Magical Girl Manga and Anime that ran in Japan in the 1960s. Specifically, it was the first magical girl series to be published, but the second to be animated. note  While the original manga for Himitsu no Akko-chan made its debut in Ribon in 1962, Sally the Witch was animated first and Akko-chan took Sally's timeslot after Sally ended. During the final episode of her original series in December 1968, Sally introduced the viewers to Akko as a "friend" of hers and invited viewers to tune in.

The Shōjo Manga was drawn and written by Fujio Akatsuka (yes, THAT Fujio Akatsuka), and published by Shueisha in Ribon magazine with a run from July 1962 to September 1965 culminating in three volumes.

The initial Anime adaptation had a run between January 6th, 1969 and October 26th, 1970, totaling 94 episodes. Directed by Hiroshi Ikeda for Toei Animation, the series aired on NET (now TV Asahi) and was rerun in later decades on Nippon TV and TV Tokyo. The anime was remade twice, once in 1988 with 61 episodes directed by Hiroki Shibata (who would later work on Sailor Moon) and again produced by Toei Animation and airing on Fuji TV. The second remake ran from 1998 to 1999, with Hiroki Shibata returning to work on the project for Toei Animation and the series again airing on Fuji TV.

All incarnations of the series follow the same premise. Atsuko "Akko-chan" Kagaminote "kagami" is Japanese for "mirror", is an energetic elementary schoolgirl who has an affinity for mirrors. One day, her favorite mirror, which was given to Akko by her mother (or in some versions, by her father), is broken, and she prefers to bury it in her yard rather than throw it to the trash can. She is then contacted by a spirit (or in some cases the Queen of the Mirror Kingdom) in her dreams who is touched that the little girl would treat the mirror so respectfully, and gifts her with a magical mirror that allows her to transform into anything and anyone she wants, sometimes copying their abilities too. The anime adaptations upgraded the mirror from a simple hand mirror into a magical compact in order to sell more toys to the show's young female viewership.

A live-action movie was released on 1st September 2012 to celebrate the manga's 50th birthday. In the movie, Akko-chan attempts to save a company which is about to be sold by using her transformation abilities. She also falls in love as a 22-year-old college student.note In other words, it's essentially 13 Going on 30 set in Japan, but without Time Travel.

The series returned as a web manga in October of 2016

, illustrated by the twin sister duo, Futago Kamikita (known for their contributions to Tatsunoko's Time Bokan series and the manga versions of Pretty Cure) and written by Hiroshi Izawa.

The '60s and '80s series were very popular (average audience rating around 18% and 14% respectively) and generated brisk merchandise sales with replicas of Akko-chan's magical compact; the '90s series did respectably (average audience rating 9.4%) but ratings and merchandise sales were below expectations, which caused its cancellation a month ahead of time with Digimon Adventure taking its timeslot. Never released in English, Akko-Chan's animated adventures have nevertheless been exported around the world, with various iterations of the anime airing in places like Italy, France, Hong Kong, Taiwan, and Latin America.

Himitsu no Akko-chan provides examples of: