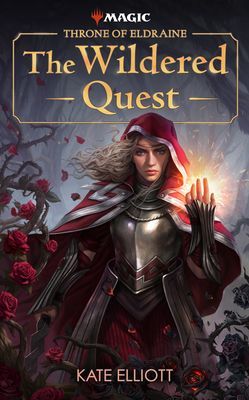 The world of Eldraine is divided into two halves: the orderly and peaceful Realm, home to five courts of brave knights and calm villages, and the beautiful but chaotic Wilds, inhabited by capricious and unpredictable fairy tale creatures. Ruling over the Realm is the High King, Algenus Kenrith. But on the eve of the Grand Procession, when the High King tours the Realm and pays visit to each of the five courts, Algenus vanishes under mysterious circumstances.

With the five courts all suspecting each other, and the creatures the Wilds encroaching further and further into the Realm amidst the chaos, it falls to Algenus' children, the twin mage-knights Will and Rowan Kenrith, to undertake their very first quest: finding their father before their world is plunged into a bloody war.

But there's more going on Eldraine than the twins can suspect: who is the mysterious elf-like being who calls himself Oko, and the silent huntsman who follows him? What is the meaning behind Will's strange visions of places that neither twin has seen, and may not even be on Eldraine at all?

The Wildered Quest is a Magic: The Gathering Novel by Kate Elliot, known for writing The Spiritwalker Trilogy and the Crown of Stars series.