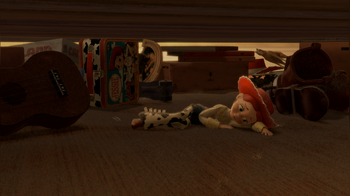 Being abandoned by the person who you loved is always tough.
You ever watch Toy Story 2, where the lesbian cowgirl is abandoned by her lesbian little girl owner? Forever? And they play that really sad Sarah Maclachlan song? And everyone in the theater starts bleeding saline out of their eyes? What is the point of that scene? Plot? Character development? No, I don't think so. I think the point of that scene was to reduce you to a quivering pile of emotional afterbirth. You went to go see a comedy about toys. You ended up halfway through flashing back to sitting at your grandma's bedside as she passed away. NO! GRANDMA! DON'T LEAVE ME! I'M NOT READY FOR YOU TO DIE YET! NOOOOOOO!!!!! Oh look! The dinosaur toy is on roller skates! I feel better now.
— Drew Magary,