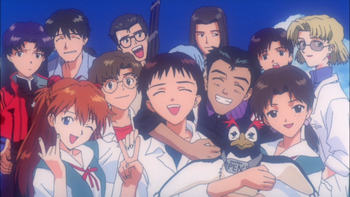 The cast of Neon Genesis Evangelion. Character tropes for Rebuild of Evangelion go on their own page.

The YMMV tropes relating to the characters have been moved to that page.

Here be franchise-wide spoilers. There are also a lot of unmarked ones as well, so tread carefully.