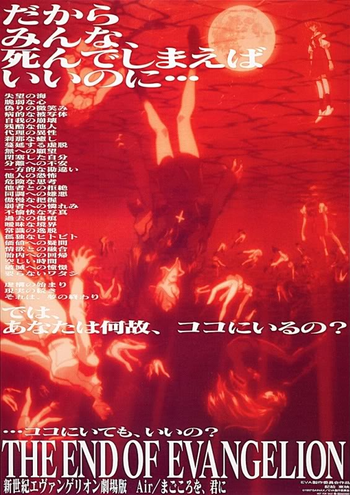 ◊ isn't any better.
Did... did the menu options﻿ just ask me why I exist? At 0:19, the menu options questioned my existence. I-I'm afraid to watch this movie. It's not even a horror movie and this thing's freaking me out. Hell, it's the damn dvd MENU and it's freaking me out! I'm gonna go curl up in the fetal position and sob quietly to myself now.
Advertisement:
Good God, the ultra-rational and Baroque Bach pieces just add to the overall "WHAT THE HELL,﻿ THIS IS HORRIFYING!" factor. And seriously, did it just question my existence?
Damnit, the DVD is questioning my existence again. F*cking hate it when it does that.
— YouTube Comments on the Death and Rebirth and End of Evangelion DVD Menus

Neon Genesis Evangelion is such a great source of Nightmare Fuel, it deserves its own space. This is what is strikes fear into your heart. This show is simply filled with so much Nightmare Fuel, that one might even argue that you won't be having nightmares after watching it... because you'll be too scared to sleep. No Rebuild of Evangelion examples please, those go to this page.

Spoilers abound, all unmarked. You Have Been Warned.

I musn't run away; I musn't run away; I musn't run away... too late.
open/close all folders
TV Series
The Original Series, we know it as a deconstruction of the Humongous Mecha genre. How horrifying is it to live in this world? Look below.
The End of Evangelion
Now for the meat of the page. Two Alternate Episodes of 25 and 26 that are so packed with Nightmare Fuel it earned its folder. Let's face it: the entirety of The End of Evangelion is a Tear Jerker where the tears are made of 100% Nightmare Fuel.
Manga
Advertisement:
General

You look a little freaked out there. Does somebody need a hug?
*splat*
It all returns to nothing...