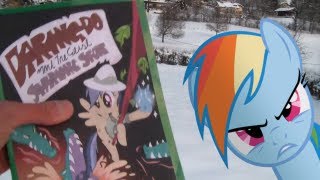 "I oughtta press you into jerk cider!"
Advertisement:

A series of videos created by StormXF3

, the same creator behind the mini-movie adaptation

of My Little Dashie. The videos, along with several others made by the user that aren't part of the series, blend together live-action footage with animation vectors of characters from My Little Pony: Friendship Is Magic, ultimately creating the story of a human (presumably StormFX3) who lives with the titular pegasus and constantly attempts to acquire her Daring Do book. Regardless of whether or not he manages to outwit her and acquire the book, every attempt ends with Rainbow Dash catching up and giving him a severe pounding.

There are 15 parts altogether (or 17, if you count the video

celebrating StormFX3's acquiring over 20,000 subscribers), each ranging from 25 seconds to over a minute and a half in length. They can all be watched (in glorious HD) here