This is a list of characters in The Crumpets animated series and their tropes. It's missing some material from the Teen Crumpets episodes. 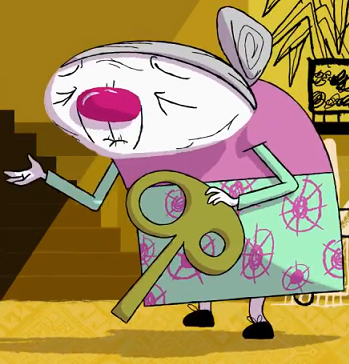 Voiced by: Michèle Garcia (French), Mary O'Brady (English)
The mother of Pa and Hurry, matriarch of the Crumpet family, and deuteragonist of the first 52 episodes. Despite her age, she's very determined to get money for her personal benefit, whether or not it's through gambling, poker, or selling items online in bad faith. She is her grandson Li'l One's best friend. She is mostly absent in the Teen Crumpets episodes.

Voiced by: Emmanuelle Hamet (French), Melissa Chambers (English)
The wife of Pa and the mother of the Crumpet children. She invents and builds machines, many which wind up Gone Horribly Wrong.
Pa 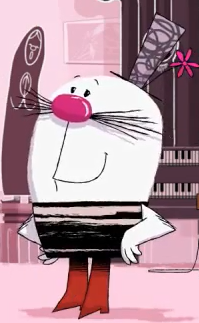 Voiced by: Tom Novembre (French), Marc Thompson (English)
The husband of Ma, son of Granny, and father of the Crumpet children. He enjoys gardening in his greenhouse, and is a singer and the conductor for his children's choir.
Li'l One (P'tit Der) 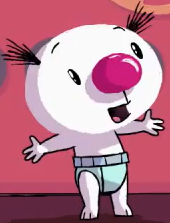 Voiced by: Théo Benhamour, Victor Biavan, and Wandrille Devisme (French), Joseph Pollock (English)
The youngest child in the Crumpet family and the show's main character until the Teen Crumpets episodes. He wishes to get Ma's love and eliminate everyone else vying that. He has a special friendship with Granny.
Caprice (Rosénoir) 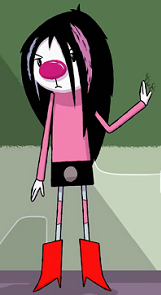 Voiced by: Rebecca Benhamour (French), Kate Bristol (English)
The fashionable goth teen daughter. Wishing to establish her clothing line, she is bipolar and is either a cheerful girl or a ruthless, irritable one. In Teen Crumpets, while she is still pretty flawed, she goes on to a couple more heroic roles. She's in love with the fellow goth Marylin. Her best friend is her neighbor Cassandra.
Pfff 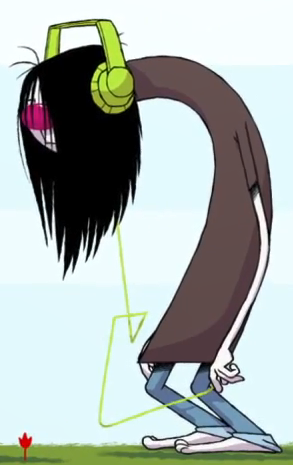 Voiced by: Léonard Hamet (French), Billy Bob Thompson (English)
An extremely tall teenager who is lazy and loves rock music. In Teen Crumpets, he is Marylin's best friend and the guitarist for their band. 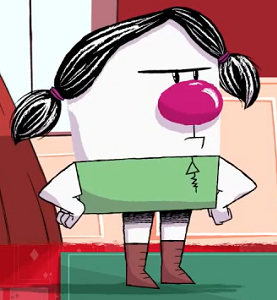 Voiced by: Kelly Marot (French), Rebecca Soler (English)
The strongman of the family. She is physically fit and powerful, and sometimes serves as a fitness coach.
Ditzy (Tetenlair) 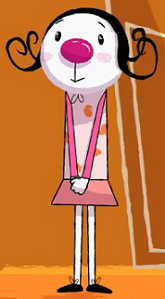 Voiced by: Rosalie Hamet (French), Erica Schroeder (English)
A curious girl with profound interest in beliefs and philosophy. Her trademark feature is her removable balloon head.
Bother and Blister (Midi and Midi-Cinq) 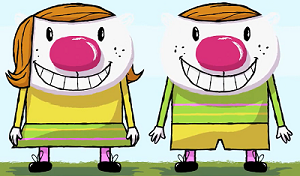 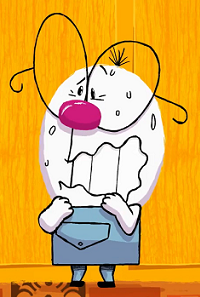 Voiced by: Siméon Hamet (French), Rebecca Soler (English)
One of youngest children, he is a timid little boy who sometimes gets bullied by Bother and Blister.
King 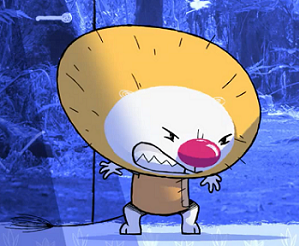 Voiced by: Antoine Raffin and Lucas Ripberger (French), Alex Luscomb (English)
Also one of the youngest children, he pretends to be a lion and wears a costume of the animal. 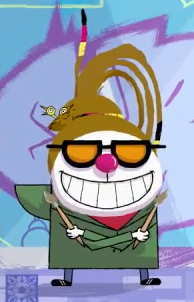 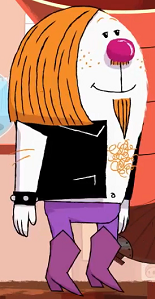 Voiced by: Olivier Podesta (French), Jason Griffith (English)
A Crumpet child who is a now an adult and usually lives away from his childhood home. He is an effeminate veterinarian who loves animals and owns many exotic ones. His best friend is Steve, whose frequent disputes have threatened their relationship. They marry in "Cheep Shot".
T-Bone (Typhon) 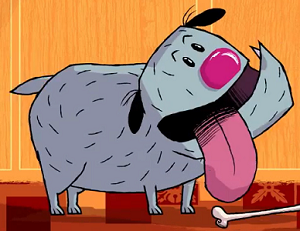 Voiced by: Marie-France Ducloz (French), Erica Schroeder (English)
A single mother who lives with Cassandra in a house near the Crumpets. McBrisk often voices her disapproval of the Crumpets for doing things she considers immoral. She falls in love with different men, but keeps failing to create or continue relationships with them. She appeared less frequently in the Teen Crumpets episodes.
Cassandra

Voiced by: Kelly Marot (French), Nicola Barber (English)
McBrisk's teenage daughter and best friend of Caprice. She lives under the strict authority of her mother, although it's no longer a major issue in the Teen Crumpets episodes. She has a romantic obsession on Pfff, which isn't requited usually.

Hurry and Harried (The Slapètes) 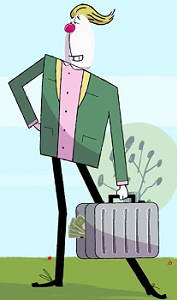 Voiced by: Luq Hamet (French), Eli James (English)
The younger brother of Pa and son of Granny. He leads a number of enterprises that deceptively earn money and exploit the Crumpets, and is also a TV personality. He doesn't appear in Teen Crumpets except for a few cameos.

Some of his lines from "Belief Relief" as he antagonizes the Crumpets are also quite hammy.

Voiced by: Juliette Degenne (French), Rebecca Soler (English)
Hurry's wife, who can support his corporate duties. In Teen Crumpets, she is absent aside from few cameos.
Gorgeous-Cordless (Gunther) 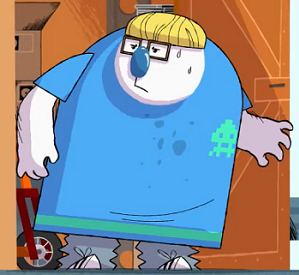 Voiced by: Olivier Podesta (French), Billy Bob Thompson (English)
The adoptive son of Hurry and Harried. He is a video game loving teenager who visits the Crumpet house. He has a romantic obsession on Ms. McBrisk in seasons one and two.

Voiced by: Yoann Sover (French)
The mysterious goth and poetic teenager adored by Caprice. Marylin is one of the main characters in Teen Crumpets and the best friend of Pfff. He is an environmentalist songwriter and singer who wants to work undisturbed. He keeps a pet mouse that he deeply cares.

Voiced by: Léon Plazol (French)
A comical teenager who was introduced in Teen Crumpets as a member of the main cast. 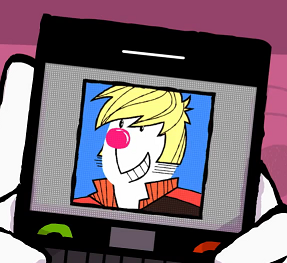 Voiced by: Donald Reignoux (French)
A celebrity actor idolized by Caprice and the McBrisks. He has a publicized relationship with the weather girl.
The Gentle Giant (Le Gentil Géant)
Voiced by: Unknown
Appearing only in Teen Crumpets, he is a massive wrestler and Triceps' love interest.
Pedro and Rodrigo Fennec
Voiced by: Unknown
Appearing only in Teen Crumpets, they're a brother pop duo that draw Caprice and Cassie's admiration, as well as the disdain of Marylin and Pfff. One of their hits is "Go Go, Flamingo."
Isadore (Isadorée) 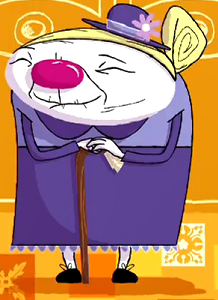 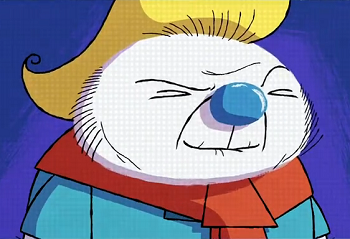 Voiced by: Sean Gormley (English)
An elderly man who plays poker digitally with Granny in "Granny Strip".
Reuh
Voiced by: Charles Germain (French)
Appearing only in the season four episode bearing his name, Reuh is a reggae-themed Doppelgänger of Pfff and Cassie's new boyfriend.
Steve 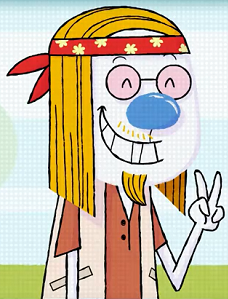 One of Granny's old boyfriends, he died from being poor. His urn is one of Granny's belongings, but it's strangely brought to Caprice's birthday party by Ditzy in "Murder Everywhere".
Weather Girl (Miss Météo)
Voiced by: Kelly Marot (French), Karen Asconi (English)
The TV weather reporter. She is Pfff's other, but more focused love interest during seasons 1 and 2. She has a publicized relationship with Cradley Booper. Her nose switches between pink and blue between a couple of her episodes. In "Pity The Prize", she may be another weather girl with black hair and a different voice and clothes.