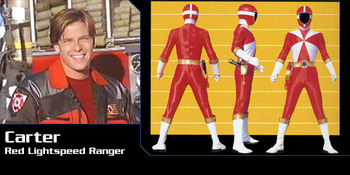 Carter was a firefighter when Lightspeed recruited him into becoming a Ranger. Having already seen a demon monster during his recent assignment, he agreed to the opportunity, and became the Red Lightspeed Ranger. 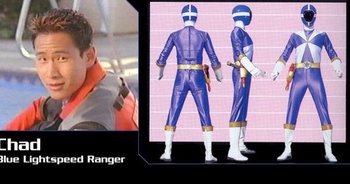 Portrayed by: Michael Chaturantabut
Voiced by: Gerardo del Valle (Latin American Spanish dub), Keisuke Fujii (Japanese dub)
I don't have to prove myself to anyone. I know who I am.

Chad was a performer at a local marine park who also studied martial arts when Lightspeed recruited him into becoming a Ranger. He agreed to the opportunity, and became the Blue Lightspeed Ranger. 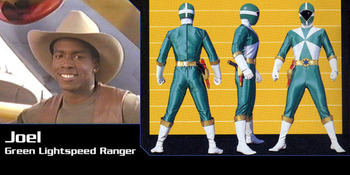 Portrayed by: Keith Robinson
Voiced by: Víctor Ugarte (Latin American Spanish dub), Yoshiharu Kurauchi (Japanese dub)
Carter: Why do you always have to be the center of attention?
Joel: Well, I don't *have* to be, it's just that I usually am.

Joel was a stunt flyer know as the "Sky Cowboy" when Lightspeed recruited him into becoming a Ranger. While reluctant after what he thought was kidnapping, he agreed to the opportunity, and became the Green Lightspeed Ranger. 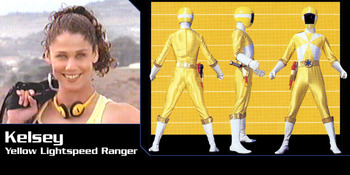 Kelsey was a professional rock climber and sports enthusiast when Lightspeed recruited her into becoming a Ranger. She agreed to the opportunity, and became the Yellow Lightspeed Ranger. 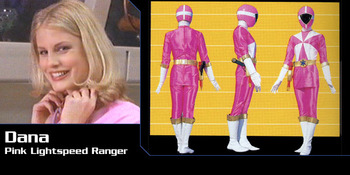 Dana was the daughter of Captain Mitchell, and already worked at Lightspeed when the demons reemerged. While she was sent to recruit the four candidates into becoming Power Rangers, she was unknowingly the fifth and final candidate by her father, and joined them as the Pink Lightspeed Ranger. 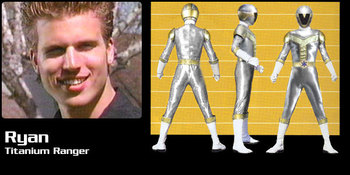 Years ago, Captain Mitchell was in a car accident that left him, Dana, and his son Ryan hanging for their life on a cliff. To keep his son from falling from his death, Mitchell reluctantly agreed to have Diabolico save Ryan at the cost of not seeing him until he turned 20.

Years later, Ryan reemerged from the demon world and stole the experimental Titanium Morpher to fight against the Rangers. However, after learning the truth from Captain Mitchell, Ryan defected from the demons and joined his father's Ranger team. 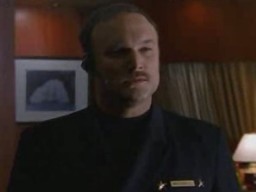 The captain and head of the Lightspeed Aquabase, Mitchell served as the Rangers mentor and occasional mission commander. At one point in his life, he was a former firefighter, and at one point, he rescued Carter as a boy. 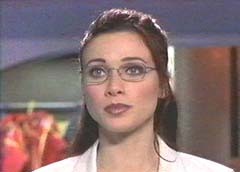 The head scientist of Lightspeed and the main creator of the Lightspeed Ranger powers, weapons, and Zords. 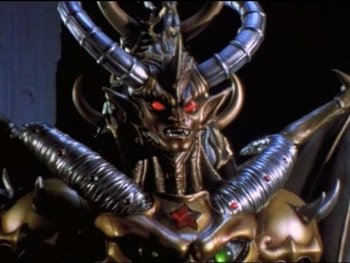 A devil-like demon and the leader of the initial demon line up. His mission was to attack Mariner Bay with demons before Queen Bansheera's arrival. 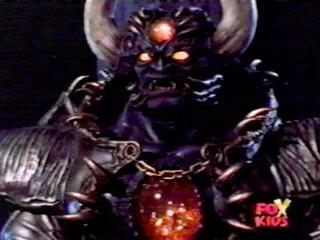 A fierce and loyal soldier to Diabolico. 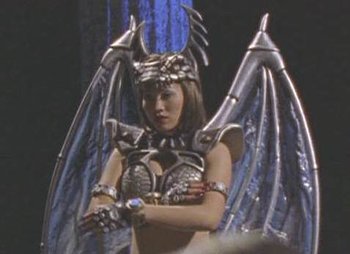 The only humanoid demon of the main group that was adapt in demonic magic. 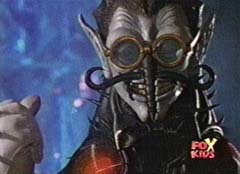 A demon-like servant for Queen Bansheera who was responsible for creating the demon monsters along with growing them. 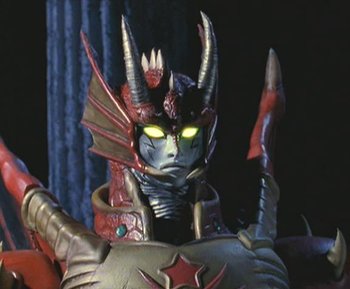 Queen Bansheera's infant son who was under the care of the other demons. After Diabolico's death, he inherited the former's Star Power and matured into Olympius. 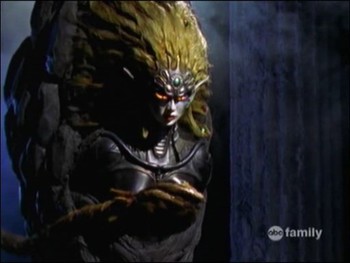 The evil matriarch of the demons who directed them into her bidding.

Impish bat like warriors that serve as the demon's foot soldiers.
The Demon Monsters

Voiced by: Ken Merckx
A fire-themed demon, and the first one that attacked Mariner Bay.

Voiced by: Bob Papenbrook
A gargoyle-themed fire samurai demon that was sent to collect a power cell the Rangers were transporting.

A team of robotic replicas General McKnight made to replace the human Rangers.

Voiced by: Dave Mallow
A three headed dragon demon that was sent to erupt Mount Jasmine.

Voiced by: Archie Kao
A skeletal dinosaur/dragon-like demon with a dragon-like head for a right hand.

Voiced by: David Stenstrom
A knight-themed demon and one of the last three monsters Diabolico created.

Voiced by: Alonzo Bodden
A viking-themed demon and one of the last three monsters Diabolico created.

Voiced by: Ezra Weisz
A falcon-themed demon and one of the last three monsters Diabolico created.

Voiced by: David Stenstrom, Alonzo Bodden, and Ezra Weisz
A three-headed super demon that Diabolico created from the crystallized remains of Demonite, Falkar and Thunderon.

Voiced by: Richard Cansino
A cobra demon that was connected to the cobra tattoo on Ryan's back.

Voiced by: Herbie Baez
A cyborg-themed electric demon that attacked a power plant.

Voiced by: Kirk Thornton
A wizard-themed demon that tried to revive Queen Bansheera.

Voiced by: Ken Merckx
A mole demon that was created by Vypra to build a laser cannon powerful enough to destroy Mariner Bay.

Voiced by: Kim Strauss
A rafflesia/ivy-themed demon that Olympus created to trap Loki and Vypra, before being sent to defeat the Rangers.

Voiced by: Michael Sorich
Played by: Jon Briddell
A crow demon that Jinxer created to retrieve an egg that contains a powerful monster.

Voiced by: Michael Sorich
A demon that was loyal to the returning Trakeena.

Voiced by: Marc Caldera
A killer whale-themed demon with the ability to take away the Rangers memories.

Voiced by: Michael Sorich
A sorcerer demon who guards the entrance to the Shadow World.

Voiced by: Peter Greenwood
A kappa demon who stole King Neptune's trident to drain Mariner Bay's water supply for the demons to attack the Aquabase.

Voiced by: Peter Greenwood
A spider demon with the ability to scan the Rangers weapons.