Characters from the Visual Novel: Ever17.

Note: Due to the nature of this game, this section will contain heavy endgame spoilers, and should not be looked at unless you've finished the game. 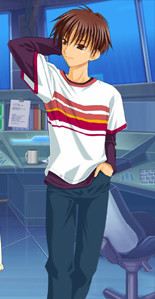 One of the game's protagonists, he is a 20 year old college student who came to LeMU with his friends. After getting trapped in LeMU (by being locked in an elevator with Tsugumi), he becomes part of the group. He is somewhat foolish at times, but is very headstrong and has many leadership qualities.
Voiced by: Soichiro Hoshi 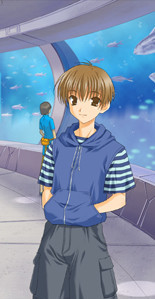 The game's other protagonist. Presumed to be about 14-15 years old, he mysteriously lost his memories, and has no idea why he was in LeMU. He is a bit timid and unsure, but always seems to maintain a kind disposition. 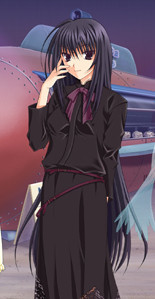 A mysterious 17 year old girl. Very antisocial, she dislikes talking to people and is often distrustful of them. Her personality is cold, often either ignoring others or speaking harshly to them. 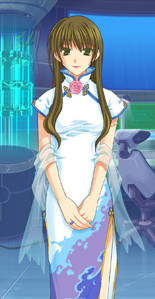 "When you close your eyes, I disappear."

A 24 year old woman who seems to work at LeMU, Sora is actually a holographic AI programmed to act as a guide to LeMU. She is calm and collected at all times, and is very helpful in explaining the inner workings of the park. 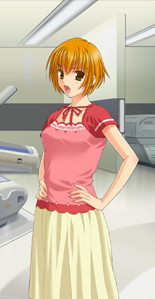 A 18 year old employee at LeMU, You is a very energetic girl who often acts as the mood maker of the group, trying to keep everyone's spirits up. Her full name is actually Yuubiseiharukana (due to her father wanting to give her a unique name to contrast with her common last name), but she shortens it to You. Is a good friend of Sara's, who calls her "Nakkyu". 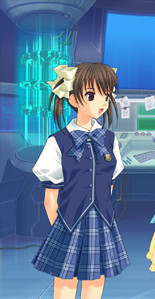 "I'll be waiting for you to come for me."

A 16 year old girl who was on a field trip to LeMU, Sara is also an energetic girl. She is very intelligent for her age, already being an accomplished hacker, but she has an obsession with ninjas. She is You's friend and old schoolmate, having gone to the same high school. For some reason, she only appears in the Kid's routes. 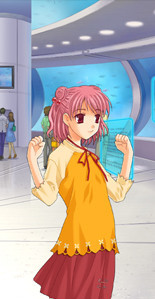 A 14 year old girl who was visiting LeMU, Coco is a very childish but upbeat girl who is always smiling despite the dangers. She is accompanied by her robot dog Pipi. For some reason, she only appears in Takeshi's routes.

The Kid from the 2017 incident. During the incident, a brief possession by Blick Winkel causes him to lose his memory. After escaping LeMU, he joins You'haru in the "Third Eye Project", a plan to save Takeshi and Coco.
During the time between the two incidents, Kaburaki graduates from school and joins Leiblich, like You'haru.
Voiced by: Soichiro Hoshi

The Kid from the 2034 incident, and the game's other protagonist. He is the twin brother of Sara, and the son of Takeshi and Tsugumi, and a Curé-Human hybrid. Like Sara, he was placed in an orphanage by Tsugumi in order to hide the two of them from Leiblich. Despite that, they were both found and captured by Leiblich, who left him with a foster family and kept surveillance on him.
His Curé-Human status allows him to see infrared light, and also gives him enhanced strength.
Voiced by: Soichiro Hoshi

The Tanaka You from the 2017 incident. She is the original You Tanaka, whose father disappeared when she was one year old. During her teenage years, she had a fatal heart condition that would kill her in a matter of years, and agreed to clone herself, giving birth to Yuubiseiakikana. Shortly after, she became an employee at LeMU in hopes of finding out what happened to her father.
Voiced by: Noriko Shitaya

The Tanaka You from the 2034 incident. She is the daughter/clone of Yubiseiharukana, and was raised to be completely identical to her. Like You'haru, she became an employee at LeMU to investigate her father's disappearance.
Voiced by: Noriko Shitaya

The Third Eye, a.k.a. the reader of Ever17, that is, the player. Blick Winkel is a 4th dimensional being who exists outside of time, being able to travel to any point in time without problem. Blick Winkel observes the events of the 2017 incident (through Takeshi's eyes) and the 2034 incident (through Hokuto's eyes) almost simultaneously, to the point that he believes that the two are the same incident.
Voiced by: Soichiro Hoshi (Drama CD only)