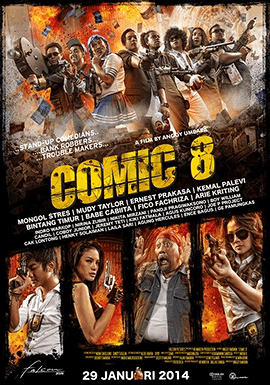 An Indonesian movie about eight men with various reasons and motives to do a bank robbery. There were robbed because of worries, Hobby, Fad, Adrenaline Sports, Rob and some even to support orphanages and the poor.

These eight Marauders are divided into three groups. Their Action was developed as a robbery that initially looks like a strange coincidence, besieged by police forces, until finally they must work together and find the answer to solve this puzzling case and look for the best solution to end everything.

In Indonesia, this movie has a tight commercial rivalry against The Raid 2: Berandal; both film has accumulated million of viewers in a relatively short time.

At the same year, Babe Cabiita also enlisted in the main cast in Caleg By Accident while Pandji Pragiwaksono stars as the main character in Make Money.