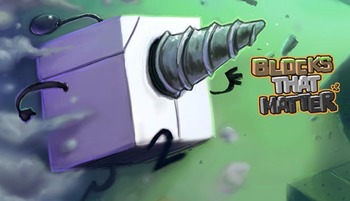 Blocks That Matter is a Puzzle Platformer, made by Swing Swing Submarine

. It is available on Steam and Xbox Live Arcade Indie Games.

In the not-too-distant future, in Sweden, the land of independent game design, two programmers have been working on a secret project. Little to nothing is known about it, but everyone has very high hopes. Unfortunately, someone decides they're taking too long, and kidnaps them.

It turns out that these men were working not on a game, but a robot: A little drilling machine called a Tetrobot. Now it's up to him to rescue his inventors from their unknown location...

Tropes that apply to Blocks That Matter: