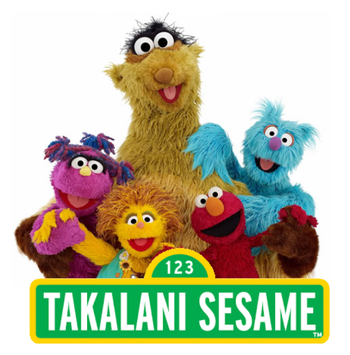 Takalani Sesame ("Takalani" means "Be Happy" in Venda) is the South African version of the children's television program Sesame Street, premiering in 2000 and co-produced by Sesame Workshop and South African partners.

According to Sesame Workshop, Takalani Sesame is a "uniquely South African interpretation of the Sesame model, engaging children and their parents and promoting basic school readiness, literacy, numeracy, and health and hygiene." The series also has a special focus on HIV/AIDS awareness and seeks to introduce HIV/AIDS safety while promoting tolerance and reducing stigma.

Like other international versions of the show, Takalani also features dubbed scenes from the American version that only feature Muppet characters, in addition to its own original material. Since some people in South Africa do not have access to televison, Takalani is also broadcast as a radio show. Both versions of the show incorporate all of South Africa's 11 national languages in its curriculum,note Afrikaans, English, Zulu, Xhosa, Swazi, Ndebele, Northern Sotho, Southern Sotho, Tsonga, Tswana and Venda and is aired in 5 of them, with the same episode in different languages on different weekdaysnote English on Mondays, Zulu on Tuesdays, Southern Sotho on Wednesdays, Ndebele on Thursdays and Afrikaans on Fridays.

The main Muppet characters created for this series include:

This series provides examples of...