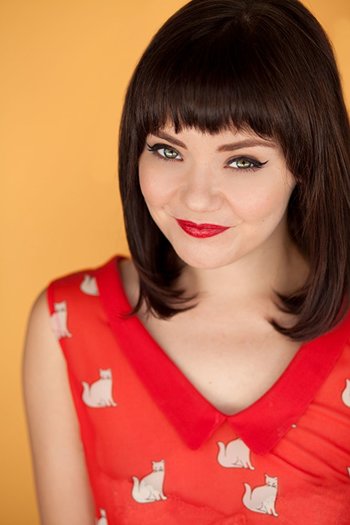 Melissa Eleanor Hunter (born September 26, 1984 in Los Angeles, California) is an American actress and writer. She is primarily known for the web series Adult Wednesday Addams, which she wrote and starred in as a twenty-something Wednesday Addams attempting to negotiate life in Los Angeles. The series grew to be quite popular and even attracted the attention of The Huffington Post thanks to the episode in which Wednesday punishes some catcallers. Unfortunately, Melissa was forced to remove the series from YouTube after receiving a cease-and-desist letter from the Charles Addams estate. Apparently, no one was allowed to portray a member of the Addams Family as long as the animated film adaptation was in production, meaning there won't be any more Adult Wednesday for the foreseeable future. Melissa has since gone on to star in the web series Shitty Boyfriends and has written for the Maya & Marty variety show and Netflix's Santa Clarita Diet.