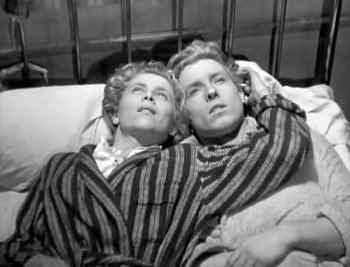 Les Enfants Terribles ("The Terrible Children") is a 1950 film directed by Jean-Pierre Melville, with a screenplay by Jean Cocteau, based on Cocteau's 1929 novel.

Paul (Edouard Dermithe) is a student at a prep school. One day when all the students are having a snowball fight in the courtyard, his buddy Dargelos (Renee Cosima, dressed as a boy) makes the rather reckless decision to wrap a rock in snow and throw it at Paul. Paul suffers a few broken ribs and is sent home to recuperate. He comes under the care of his sister Elisabeth (Nicole Stefane), which is when their unnaturally close and super-creepy relationship is revealed. They live in the same room, they have no nudity taboo, she calls him "darling", they play weird secret games...and for that matter Paul doesn't seem to be that seriously injured, but he stays at home in the close company of his sister.

Paul and Elisabeth are joined by Paul's good friend Gerard, who starts spending a lot of time with them. Meanwhile, with their mother having recently died and Paul content to spend every day lounging in bed, Elisabeth gets a job as a model in a clothing store. There she meets fellow model Agathe (Renee Cosima, not dressed as a boy), who moves into their spare room. Paul and Agathe are immediately attracted to each other—and Elisabeth isn't happy about it.