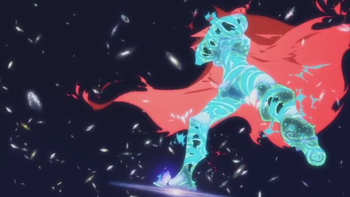 Is that Kamina? Nope. That's a mecha eleven times the size of the observable universe!
Tengen Toppa Gurren Lagann normally has at least one of these an episode, sometimes more. And if they ever don't, it just means they're taking a run up for the next episode. Better pack a lunch buddy, you'll be here for a while.