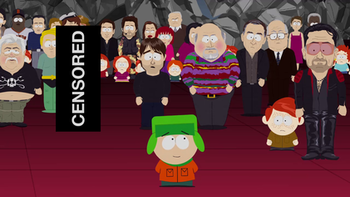 "You see, I learned something today..."
In this sequel to "200," the celebrities that have been insulted and mocked for over 200 episodes continue their search for Mohammed so they can find the secret of why he's never been insulted. Meanwhile, Cartman discovers the horrible truth: He does have a father and the story that his mom is a hermaphrodite was a lie.

Cartman discovers that he killed his own father.

Cartman discovers that he killed his own father.