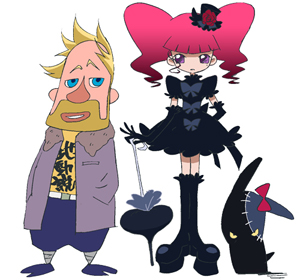 By accident, middle-school student Marika ("Marie") not only finds herself in the mysterious town of Garihabara, but also discovers that her stuffed animal has come to life. She meets up with several notable scientists from the past, the first and foremost being Galileo Galilei (nicknamed "Gali"). He is soon followed by John Fleming, Marie Curie, Sir Isaac Newton and many other people who had a big influence on science—and who for some reason are still alive and have set up residence on an island where the bridge to the mainland appears and disappears at whim.

The show is aimed at middle-school students and attempts to present scientific concepts at their level. This leads to an often strange mix of scientific exploration, visual slapstick and witty banter, turned up a notch by regular displays of gratuitous violence—usually against poor Gali.

Marie & Gali is the first animated series by Toei to be aired on the NHK in 30 years (in 2009), and it's likely one of the strangest shows that station has broadcast in quite a while. The episodes are about five minutes each, which is enough to leave you wondering what the heck you have just been watching.