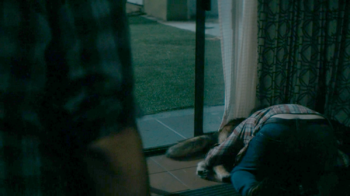 "...it's just the dog."
Written by Jack LoGiudice
Directed by Adam Davidson
Travis: What happens if what's out there gets in here?
Daniel: We run.
Travis: Where?
Daniel: In different directions.
Advertisement:

Outside the Salazars' barbershop, the rioting continues.

Chris watches as the rioters tip over a minivan and continue marching, but is surprised by a walker staring at him through the grate. Travis tells him to stay back from the window.

At the Clark residence, Alicia hears rattling noises and asks her mother what's happening. Madison tells her to ignore it as she gives another dose of the drugs to Nick to keep him stable. They discuss why Mr. Dawson attacked Mrs. Cruz across the street, but Madison tells them both that they're safe inside the house. She promises them that Travis will be back soon.

Back at the barbershop, the group begins to make plans to head back to Madison's. When tensions threaten to boil over between Travis and Daniel Salazar over what to do, Chris alerts them to a nearby wall, which is rapidly heating up. They realize that there's a fire next door and quickly collect their belongings before opening the front door and fleeing.

They rush out as rioters come in, hooting and hollering. Outside, Chris notices a walker tackling a riot officer to the ground and biting him in the neck. Travis tells him to run, and they all move towards his truck as more cars are firebombed.

The group continues to flee past rioters, but a LAPD firehose knocks over a scaffolding and causes Griselda to become trapped underneath. Daniel sees this and rushes over to help, and Travis picks her up and carries her to the truck. They hurriedly get in and drive off before more rioters arrive. They also discover that Griselda has a broken leg as they drive off and look for a hospital.

As they go past a medical center, Travis and the others see walkers chasing staff members and a SWAT team holding a perimeter. The officers shoot and kill an elderly patient as they pass and look on in shock. Afterwards, Daniel asks Travis if his family can stay at their house and get a cousin to pick them up later, and the latter reluctantly agrees. They look towards the downtown core and see the entire electrical grid fail, plunging the city into darkness.

Madison and the kids attempt to ignore the threats outside by playing a game of Monopoly, but they are distracted by the fact that Travis isn't back home yet. The power goes out soon after and she bickers with Nick about what they should do, but they are distracted by Alicia, who is looking out the window. Madison tells her to stay back, and they hear noises from outside.

When Nick opens the blinds to look, he sees a whimpering dog, and hurriedly bring him inside. After closing the door, they realize the dog has someone else's blood on it. The dog runs to the back of the house and starts barking, and Nick chases after to calm it down. When he does so, he sees the undead Peter Dawson walking across the street towards them.

Madison tells the kids to hurry, and they flee to their next door neighbour's house. She calls for the owner, Susan, but doesn't get any response back.

The lights flicker on and off as Alicia looks around Susan's living room and Nick searches for Susan's husband's hunting shotgun. He finds it and tells his mother to look for ammunition, while Alicia looks outside and sees the undead Peter walking into their house. She calls the others over and they look on as the dog barks at Peter, who attacks and kills it. Madison loads the shotgun and tells them to stay quiet. At that moment, Travis's car pulls into the driveway and they rush to stop him.

Travis enters the Clark house and calls for Madison, but can't find her. He sees Peter eating the dog and attempts to talk to him, but the latter goes to attack. As Travis fends him, Madison rushes over with Nick and tells Alicia to go back and grab the rest of the ammo from Susan's house. When Alicia does so, she sees signs that Susan is still in the house.

Travis is still fighting off Peter when Madison and Nick enter and tell him to get back. At that moment, Daniel appears and takes the gun from her, then fires a shot into Peter's head. He falls back but turns around again, face mangled from the bullet. Daniel walks up and puts a round into his head at point-blank range, killing him for good. Everyone stares in shock at what's happened.

Alicia runs from Susan's house and is chased by the undead woman. Hearing what's happening, Chris pulls Alicia over the fence before Susan can attack. The rest of the group runs outside and looks at Susan, who futilely attempts to claw at them through a fence gap.

Nick reveals to the rest of the group that people who turn aren't sick - they're dead. Alicia promptly freaks out, realizing that Matt is dead as well.

Madison and Travis begin arguing about whether to flee Los Angeles, but he suggests hunkering down for the night and leaving in the morning. Daniel also reveals to him that he should burn Peter's corpse to prevent the sickness from spreading.

Soon after, the Salazars begin arguing over what they should do. Their daughter, Ofelia, calls them out for wanting to leave with Griselda injured. They agree to wait until the morning to decide what to do.

The next morning, Travis digs a grave for Peter while Susan attempts to claw at him through the fence. Daniel also teaches Chris how to operate a shotgun. When Travis expresses concerns over his son being taught how to use guns, Daniel tells him that it's necessary. They get ready to pack up and leave the house.

Madison goes outside and goes to kill the undead Susan, but Travis sees this and convinces her to leave the woman as-is. Afterwards, she tells Nick that she gave most of the drugs to Griselda to ease her pain. The Salazars stay behind at the house while the Clark and Manawa families pack up and drive away.

Just before they leave the street, they see Susan's husband, Patrick, arrive back home. Madison gets out of the car and rushes to stop him.

As Patrick arrives in the backyard, he is horrified to see Susan, who stalks towards him. Madison arrives and tells him to get back, and just before Susan grabs him, she's shot... by a member of the National Guard, who arrives with a platoon and hustles them away from the corpse.

Soon afterwards, a fleet of Guard personnel and trucks arrive in the neighbourhood. Travis answers questions while Madison attempts to get some information from patrolling soldiers, who tell her that Patrick was taken away because he was covered in infected blood.

Travis and Madison watch as the soldiers patrol the streets, and wonder if things will ever go back to the way they were. Inside the Clark house, Daniel sees the soldiers moving walker corpses, and tells his family that it's already too late to leave...

"The cavalry's arrived. It's gonna get better now."