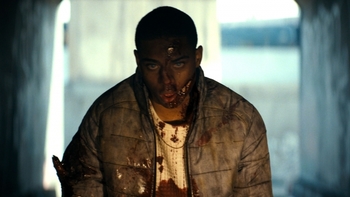 Even freshly turned walkers can be creepy.
"Before she brought you in, she made me promise that I would not harm you, that we would talk, and that I would exchange you for my wife's return. That is not gonna happen."
— Daniel Salazar preparing for a torture session

These examples really put the Fear in Fear the Walking Dead...